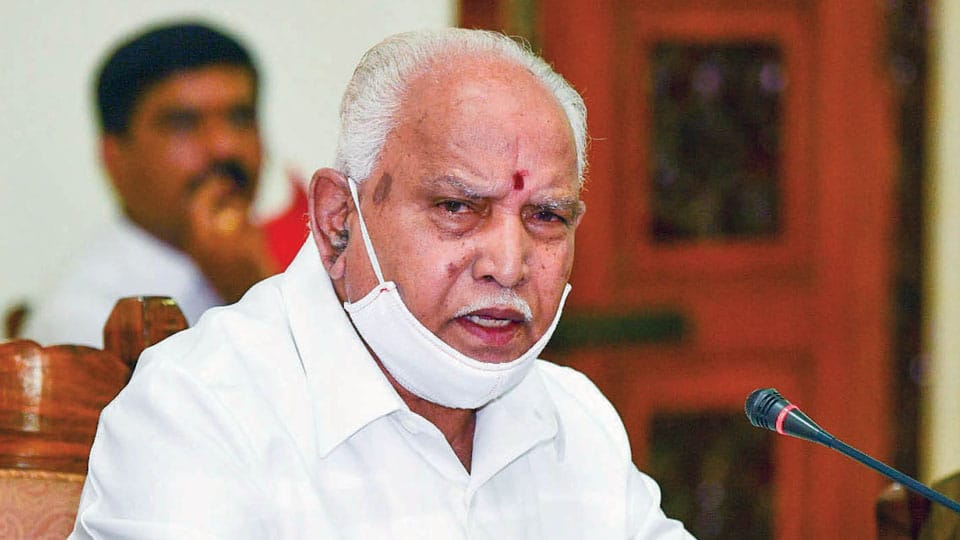 Bengaluru: Karnataka Chief Minister B.S. Yediyurappa this morning said that his Government had no plans to impose night curfew as recommended by the State’s COVID-19 Technical Advisory Committee (TAC) to curb the spread of pandemic during the New Year celebrations

“For now, there are no such plans,” Yediyurappa told reporters when asked if the Government was thinking about bringing back night curfews.

Also, the number of virus-positive cases in Karnataka has shown a steady decline. “The Union Government has allowed States and Union Territories to impose lockdowns and night curfews based on their assessment, but Karnataka is not likely to exercise such options,” Government sources said.

“It is an option, but the situation at present doesn’t warrant it as the virus infection rate has shown a steady decline. Also there is a surge in recoveries. Clearly, aggressive testing on the part of the Government, plus awareness within the public is keeping numbers low. As for new containment and surveillance guidelines, we are already implementing most of them,” sources added.

After the nationwide lockdown was lifted, the State Government had re-imposed a lockdown between July 12 and 22. Cases spiked in July – September, but began to a decline from October. From a peak of around 10,000 cases a day, the number has now come down to 1,000 cases each day.

In an advisory submitted to the Government on Nov. 30, the TAC had warned that a second wave of COVID-19 was expected during January-February 2021. The TAC had recommended night curfew (8 pm to 5 am) from Dec. 26 to Jan. 1 — banning New Year celebrations or parties during this period to prevent people from gathering.

It specifically sought a ban on celebrations in resorts, hotels and on Bengaluru’s high-streets such as M.G. Road, Brigade Road and so on. On Thursday, Home Minister Basavaraj Bommai told reporters in Mangaluru that the Government had not discussed introducing night curfews.

Meanwhile, Medical Education and Health Minister Dr. K. Sudhakar told reporters in Bengaluru this morning that a final call on night curfew will be taken after discussing with Chief Minister B. S. Yediyurappa.