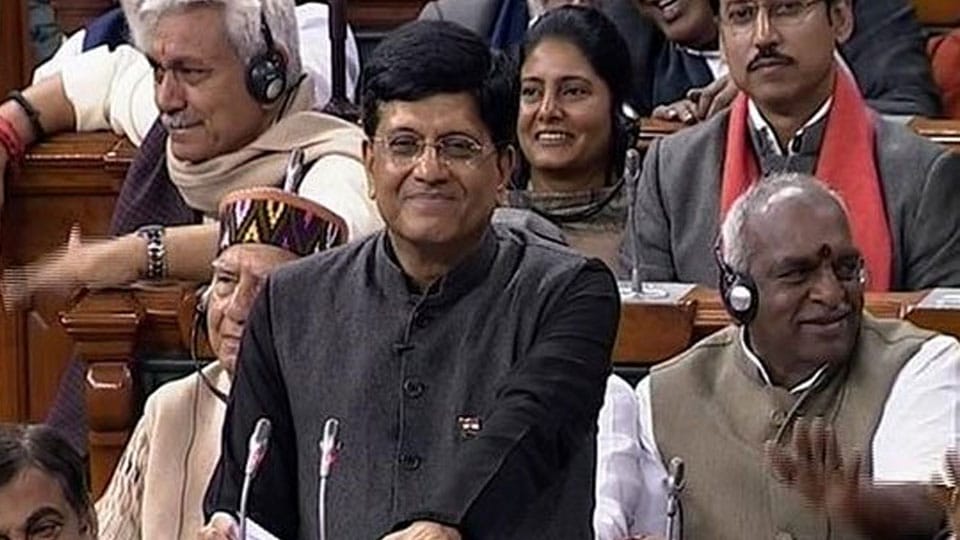 No tax for income up to Rs. 5 lakh

New Delhi: In a clear move to woo voters in the to the General Elections, Interim Finance Minister Piyush Goyal this morning enhanced the limit of individual Income Tax from Rs. 2.5 lakh to Rs. 5 lakh per annum.

Unveiling the Interim Budget for 2019-20, he said the Income Tax rebate will benefit three crore people from middle class. After the new measure, those having an income of Rs. 6.5 lakh annually will not have to pay any income tax provided they make investments. This is the 5th and last Budget of Modi-led NDA Government. Goyal sought Parliament’s approval (vote on account) for incurring expenditure for three to four months until a new Government is installed after the Lok Sabha Elections.

The Finance Minister’s speech was shorter than usual and mainly concentrated on the achievements of the Government in the past five years.

He touched on woman-led empowerment and claims that 70% of beneficiaries of the PM Mudra Yojana are women. 26 weeks of maternity leave for working women and Pradhan Mantri Matritva Yojana are all empowering women.

He said that the GST Council will take steps to reduce tax burden on home-buyers. Most daily-use items are now under 0-5% tax slab under GST,  Goyal said.

GST exemption for small businesses has been raised to Rs. 40 lakh. The government also abolished duties on 36 consumer goods.

“We are committed to fighting black-money. Anti-black money measures taken by us in the last year have brought income of Rs. 1.3 lakh crore back in circulation and almost 3.38 lakh shell companies have been found and deregistered,” said Goyal.

Reacting to the Budget, Arun Jaitley said that it marks a high point in the policy directions that the Government headed by Prime Minister Narendra Modi has given to this nation.

“The Budget furthers the agenda of the government headed by PM Modi to comprehensively address the challenges of the economy. The Budget is unquestionably pro-growth, fiscally prudent, pro-farmer, and pro-poor and strengthens the purchasing power of the Indian middle class. Between 2014 and 19, every Budget has given significant relief to the middle class,” he said.