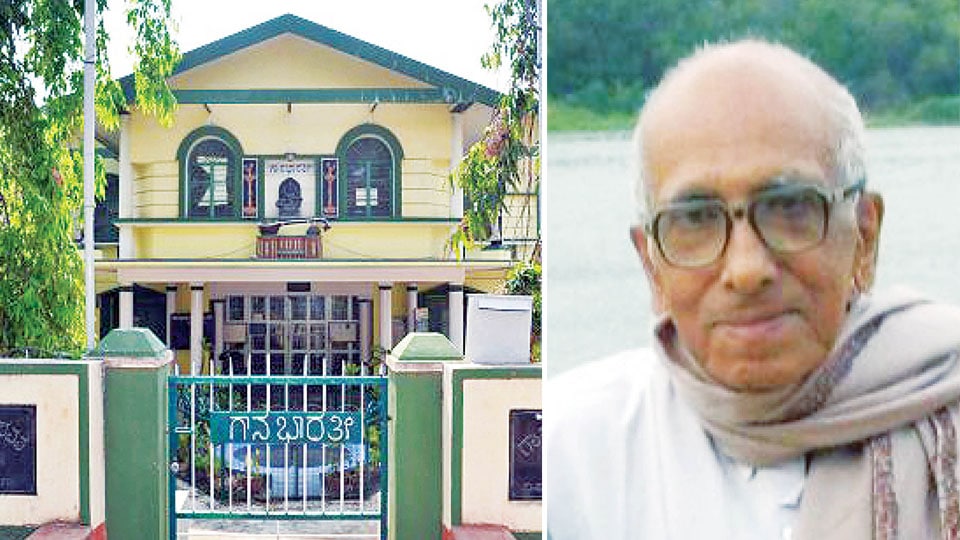 One afternoon in the year 1979-80, a surprise visitor came to my office to meet me. It was Prof. G.T. Narayana Rao, known to all, including his students, as GTN. Both of us were meeting each other in Mysore for the first time after we parted, he as teacher and I as his NCC student.

GTN was a mathematics lecturer in Madikeri First Grade College, now Field Marshal K.M. Cariappa College, Kodagu, when I was a student with History, Economics and Political Science (HEP) as my optionals. Mine was the last batch of intermediate class of two years and studied in this College from 1956 to 1959.

GTN was also an Officer of the rank of Major in the National Cadet Corps (NCC). I had joined the NCC and GTN was a very strict officer with a high sense of discipline whom we used to fear. He was a great lover of science and mathematics and had scant respect for arts subjects and much less for those who pursued it as a study like me. Once in Mysore when I mentioned to him that Political Science was my subject for graduation he interrupted me and asked, “What did you say?” I said, “Political Science.” He retorted: “Political Science. Do you know the meaning of the word science? You people call politics a science to make a simple, common subject complex and sound very important.”

Be that as it may, I got up from my chair the moment I saw him entering my office calling my name loudly and asking in Kannada, ‘What? Can you recognise me?’ Since GTN had not changed much physically, except for normal aging, I had no problem and I acknowledged him with great humility.

Like always, he was a man in a hurry. He mentioned the purpose of his visit as asking for a little favour! He and a few of his friends, who were music-lovers, had formed a group and were holding music kacheri once a week at the nearby Somani College class room given to them free of rent. GTN wanted publicity for those programmes. I told him it was not a favour from a newspaper, but a newspaper’s very purpose and my pleasure. Thus began our relationship, not as Guru and Shishya but as mutual admirers. Thereafter, he would give me the weekly programmes and also a review of them. I knew he was a man of great likes and dislikes and that could be seen in his reviews. Let it be. But one aspect of his life was clear — he was passionate about whatever he did.

One day he asked me, for the first time, about my family. I told him my wife was a college lecturer and I have one infant son. However, in passing, I mentioned that I stayed in Gokulam and she joined me once in a week coming from Kushalnagar where she stayed with her sister but worked in Somwarpet College. He began to show concern about my predicament and asked, “Why don’t you get her transferred to Mysore? You know your college mates A.K. Subbaiah and M.C. Nanaiah.” Both of these gentlemen were at that time MLCs with some clout in the Government. I told him I had already done that circus and now biding my time. I mentioned the name of Janata Party City President Kempegowda through whom I was pursuing the matter. He expressed his sympathy and left.

About ten days later, he came to me with a post-card, yes that yellow-tinted post-card, written to him from Mangalore by a retired senior official of the PU Board saying that he was going to Bangalore and would attend to his work. What work? Well, you guessed it. Getting K.B. Ganapathy’s wife transferred to Mysore! I thanked GTN for taking trouble for my sake without even a request from me. I had no hopes on his efforts.

But after about 15 days, my wife Ralie got a transfer order to a college in Mysore city, which was much sought after by many lecturers — Maharaja’s Pre-University College, Mysore. I could not believe it, so also my wife. I rushed to GTN’s house, for the first time, to confirm if it was true, real.

GTN, as was his wont, got me a hot cup of coffee and said though he was happy with the news, he did not know if it was because of him. He, however, received another post-card from his friend confirming the transfer. Thus ended my one-year struggle for getting this transfer with the help of GTN. And during those days, I must have gone to Bangalore a dozen times, only to get fooled by a dozen different VIPs and agents.

GTN’s unsolicited help to me at a time I was Mr. Nobody in Mysore has taught me a moral lesson about the nature of helping the helpless and I have been doing that quietly. Our Suttur Mutt Seer Sri Shivarathri Deshikendra Swamiji, I know some instances personally, too is helping people without much ado or publicity.

As our contacts increased, I requested GTN to write music review in English for Star of Mysore. His first response was that he could only speak in English but writing was difficult! It was more of his humility than the reality. I knew he was a pucca Kannada ‘fanatic’ and had already written many books in Kannada. Surprisingly, I mustered the audacity to tell him, “Sir, you write in English and I will edit!” He brought out one of his loud laughter and said, “Yes, let me learn from you.” I smiled. So it was, he began writing not only on music but also on related subjects and became known as city’s No. 1 art critic writing for ‘The Hindu’ and a couple of music journals inviting both bouquets and brickbats, even lawyer’s notice. He would often say that it was ‘Ganapathy who taught me how to write in English.’ I was certainly not flattered but it showed his humility. He was thankful to me for                                                            giving him an opportunity to write for SOM which, by now, had made a name with thousands addicted to it.

In retrospect, I should think GTN’s retirement from the Mysore University was a great blessing for Ganabharathi, the music association he helped establish. Ganabharathi got its own site and building in Kuvempunagar because of the efforts of GTN and his team of dedicated music-lovers. He travelled to Bombay and other places to raise funds for the building which was named Veene Seshanna Bhavan, after the great Veena Vidwan of Mysore Palace, Asthana Vidwan, Veene Seshanna. For a year, he refused to take any honorarium for writing in Star of Mysore despite my telling him that we do pay as a policy. I also told him, knowing his concern for me, that Star of Mysore is making profit and also paying Income Tax. Surprisingly, when I insisted that he accept it as my Guru Dakshina, he agreed but on one condition — I must give it to Ganabharathi as a donation — so it was.

While in service and even after retirement, his labour of love for intellectual pursuit continued unabated so much so he produced 26 books on varied subjects in Kannada and three of them in English, one being about his meeting with Dr. S. Chandrashekar, the man who discovered the black hole, in Chicago where he went during his American sojourn to see his son. A prolific writer, Science, scientists and mathematics were his forte. He also wrote his autobiography “Mugiyada Payana” (Unfinished Journey). He was a recipient of many awards but ironically, he got the honorary doctorate, not from the University of Mysore but from the Karnataka State Open University and then Karnataka Rajyotsava Award in the year 2007, just before he died on June 27, 2008. He was 82.

When he died, I was in Houston, USA. I felt deeply saddened. I am sure the Angels at the Pearly Gates of Heaven (no matter GTN never believed in religion or God) must have said, to quote the words of the American Poet Edward Parker, as follows: