Home » Columns » Abracadabra By K. B. Ganapathy » Of Journalism and Journalists ! 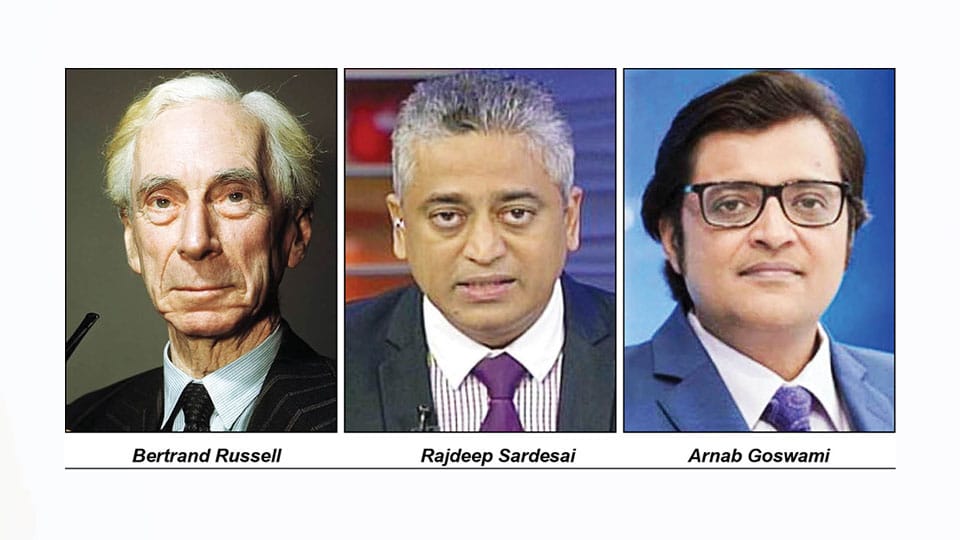 Of Journalism and Journalists !

Newspapers, magazines, TV channels and social media have all come under the scrutiny not so much of the users of these news sources as from those so-called intellectuals and ideologues who are per se classified as Right Liberals and Left Liberals.

For example, ‘if you ask, to which category Arnab Goswami or Rajdeep Sardesai belongs, one who is TV news-savvy will tell you the category without batting an eye-lid.

This colouring of media became perceptible after Indira Gandhi became the Prime Minister and continued as an undercurrent in the still waters of journalism and went unnoticed till 2014 when Prime Minister Narendra Modi came to power under BJP. Undoubtedly, he is a Hindu nationalist accepting the ideal of Secularism enshrined in our Constitution. But the Opposition parties looked at BJP with suspicion as rank Communal ignoring the Communal and Dynastic character of their own parties in quest of power, coming together under different names like Mahagathbandhan or as in Maharashtra Maha Vikas Aghadi  (MVA).

Well, in such a political situation the media indeed has a difficult role to report news and views without appearing to be biased or coloured or partisan. No wonder, media and journalists have come under severe criticism from all sections of the people, the consumers of news.

The earliest stigma that was slapped on journalists was calling them as “Yellow Journalists.” Not that all journalists are paragons of virtue, but to brand a journalist, who writes the facts, acts as the ‘eyes and ears’ of the reader, which may not be to the liking of an individual or group of people, as a yellow journalist or a blackmailer, is unfair. The worst was when some one called journalists as “presstitutes.” No.

By the way, much change has taken place in the manner journalism is practiced today. For example, during my days in 60s and 70s,  there used to be War Correspondents. Frank Anthony of Bombay newspapers used to work as one very egregiously  read. But by the time Iraq War began, led by USA, we heard of not War Correspondents but of “Embedded Journalists !” Who is this new creature? He does not cover both the enemies in the War. He is cooped up in the armoured tank of the Americans and reports !

Purveying and dissemination of news, through what came to be known as newspaper, has a history of centuries, but newspaper as a professional work, in certain physical format, evolved over long years in different parts of the world and readers came to accept its format, size, contents as their source of news, views and entertainment. After all, like politics and economics, journalism cannot be an exact subject. Though there were educational institutions and Universities imparting education on various subjects like Arts, Commerce and Science, none of them taught Journalism as a subject for long. Thus, journalism came to be a social need. The advent of Democracy considered it as the Fourth Pillar (Estate) along with other three pillars of Democracy — Legislature, Executive and Judiciary. Which is why, media is called  the “Fourth Estate.”

Yet, journalism came to be taught in the Universities only since the late last century. When I studied journalism in Bharatiya Vidya Bhavan (BVB), Bombay, it was only a diploma course in the early 1960s and there was no college giving degrees. But today all that is changed and journalism has become a subject of professional study in its various specialisations.

Be that as it may, as a result many books on the subject have been published by experienced editors and journalists all over the world. For example, nearer home, India’s well-known journalist, author and columnist TJS George found time to write a very instructive book in the year 1989 on editing a newspaper titled “Editing, a handbook for journalists.” This has been my guide ever since it was published because it tells you among other aspects, about giving headlines, editing pictures, effective, reader-friendly layouts, facets of subbing (editing copies sans deficiencies in information, use of apt words, including journalese etc., etc.)

READ ALSO  The Rotary Journey: To S. Korea and Japan - 6

Anyway, I doubt if today’s reporter, writer or sub-editor ever cared for such fineness in editing a copy. To give one example, last week I was going through a national newspaper of repute. I happened to see a double column headline item titled, “Hathras victim gang-raped and murdered: CBI,” news originating from Lucknow, UP. I know a huge controversy had erupted about this case of allegations of “cover-up” by the Police (say government).

The victim was from a poor, backward class. A nation-wide outrage was triggered after the UP Police had claimed that the victim had not been raped. The victim died in September this year at a Delhi hospital after making a ‘dying declaration’ and the Police relied on it. But what was the ‘dying declaration’ is not in the report.

The reader is naturally curious. The news says, “The family of the accused had alleged that the teen was killed by her brother.” The reader wants to know what the brother of the victim has to say about this allegation. I guess, the sub-editor should have taken the trouble to find out and provide this information to his readers. Let it be.

Now let me recall the opinion of Bertrand Russell, the Nobel Laureate, the famous author, philosopher and Pacifist about journalists. According to him, journalists are masters in creating sensation and mass hysteria. I am inclined to agree after watching our own world of journalism.

Once I thought there was going to be a “coup” in Delhi a few years before 2014, with a barrage of accusations against the then Army Chief. And even later many such or similar sensations were created by a section of the media.

To Russell: “Mass hysteria is a phenomenon not confined to human beings; it may be seen in any gregarious species.” He says that once in Africa a large herd of wild elephants, seeing an aeroplane for the first time, got so frightened that they were all in a state of collective terror. As, however, there were no journalists among them, the terror died down when the aeroplane was out of sight. Should I say more?