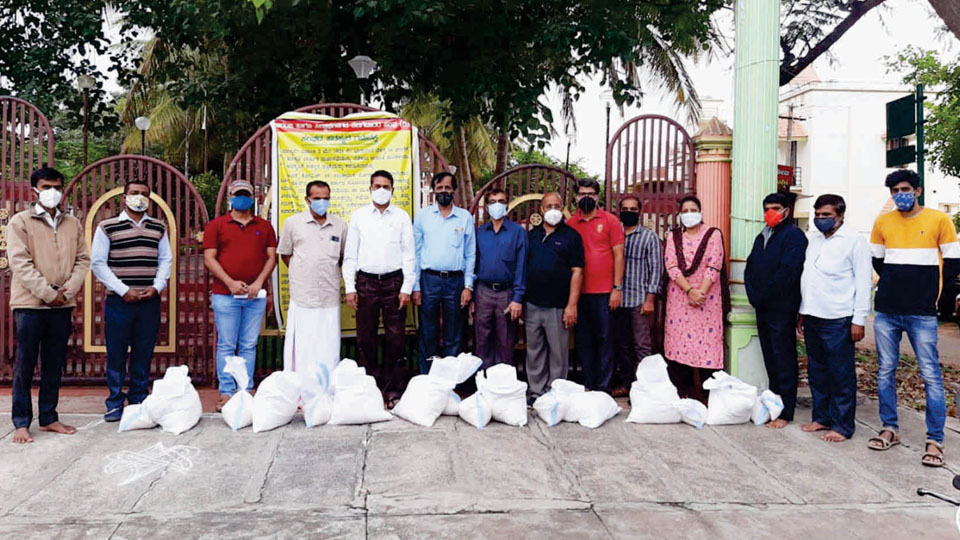 Organisations and associations distribute food kits, groceries to the needy

Sri Shankara Jayanthi Sabha, distributed grocery kits to poor families who are in deep trouble due to COVID pandemic. The kits were distributed by MLA L. Nagendra and former Mayor R. Lingappa in the presence of Corporator Vedavathi and Sabha President H.R. Sudarshan.

In a bid to feed stray dogs, who are suffering due to lack of food as the roadside eateries and hotels are shut due to COVID-induced lockdown, Darshan Abhimani Balaga are providing rice-mixed milk, biscuits and other eatables to over 300 stray dogs at Siddarthanagar, Dr. Rajkumar Road, Maharaja’s College Grounds, Gandhinagar, Nazarbad and other localities in city. Balaga Convenor Harish Naidu, Chethan Kantharaj, Rohit, Manju, Vinod and others were present.

Lions Club of Mysore Vaidyas with the support of Malabar Gold distributed 120 grocery kits to 22 teachers, 44 needy people and 24 slum-dwellers. The kits were sponsored by Malabar Gold. Director of Malabar Gold Sharfuddin spoke about the service rendered by his company and assured more service along with Lions. Ln. Ravindranath, Secretary of Shantala School Ln. Santosh, Ln. Revanna, Ln. Venu and others were present.