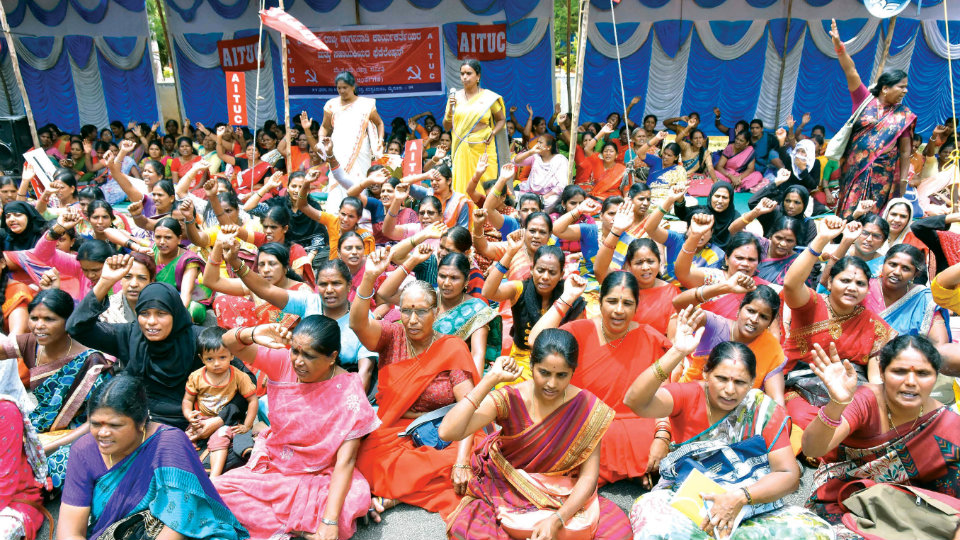 Mysuru: As part of a Statewide agitation, Anganwadi workers under the banner of AITUC, affiliated to Karnataka State Anganwadi workers and Helpers Federation, Mysuru District Committee, began a two-day overnight stir in front of the Deputy Commissioner’s Office here yesterday seeking fulfilment of their demands.

The demands include: Conversion of Anganwadi Kendras into Kinder Garten (KG) classes, English Convent and Nursery Schools, Monetary benefits upon retirement, higher pay and pension, among others.

Stating that there were 65,911 Anganwadi centres and 3,331 Mini Anganwadi centres in the State, the protesters demanded converting them into Kinder Gartens and starting of LKG and UKG classes for kids, release of pending NPS funds, a hike in monetary benefits upon retirement, payment of monthly honorarium based on seniority as is being done in Goa and pension of Rs. 6,000 per month as announced by Chief Minister H.D. Kumaraswamy in his election manifesto.

The protesters warned of launching a two-day agitation in Bengaluru on July 30 and 31, if their demands were not met by then.

Federation office-bearers Y. Mahadevamma, Jayamma, Bhramarambika, Jayalakshmi, Puttamma and others took protest which will conclude this evening after submitting a memorandum to the Government through the Tahasildar.