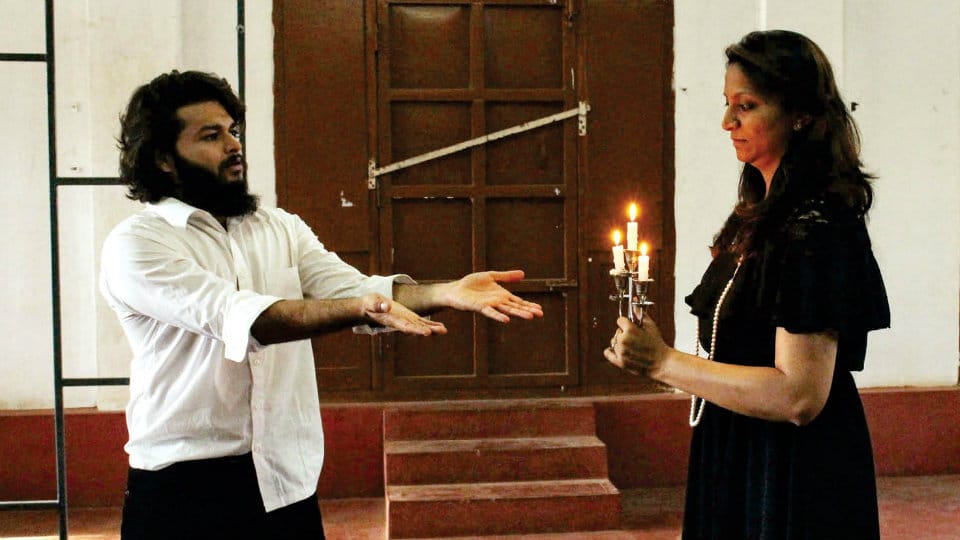 Prof. K.P. Vasudevan has translated the play into Kannada while Prof. S. R. Ramesh has directed the play.

Macbeth is a story of power, ambition and ultimately murder. Macbeth and Banquo are both Generals in King Duncan’s army.They have fought a huge battle and cross a wasteland together. From nowhere, three witches appear and they tell the men their separate fates. Macbeth will become the Thane of Cawdor and then King. Banquo shall not become King but his sons will be Kings.

Macbeth writes a letter to his wife Lady Macbeth about the prophesies. She is also driven by the ambition and incredibly tough. Macbeth is not as determined as his wife about the need for murder. Lady Macbeth remains adamant and pressurises him with attacks on his manhood as well as reminding of their feelings for each other.

Macbeth is dragged by the “dagger of mind” and kills king Duncan and killing doesn’t stop there. Killing and murdering people become regular feature in Scotland. He dreams of a world without crime while becoming enmeshed in crime more and more deeply. History in Macbeth is confused the way nightmares are; and as in nightmare, everyone is enveloped by it.

This thriller, multi-enchanting world created by Shakespeare is relevant to this contemporary world. The ambitious dictators will not blow up the world but they keep on murdering innocent people till the end.

Parivarthana’s production has more than 25 actors — Ravi Teja, Tejaswini Jois, H.R. Adhyapak,  Dwarakanath, Satish are in the lead. Lighting design is by Arunamurthy and background music by Narasimhan (Nachchu), artwork by H.K. Vishwanath and set design by Akmal Pasha. The duration of the play is approximately 115  minutes.