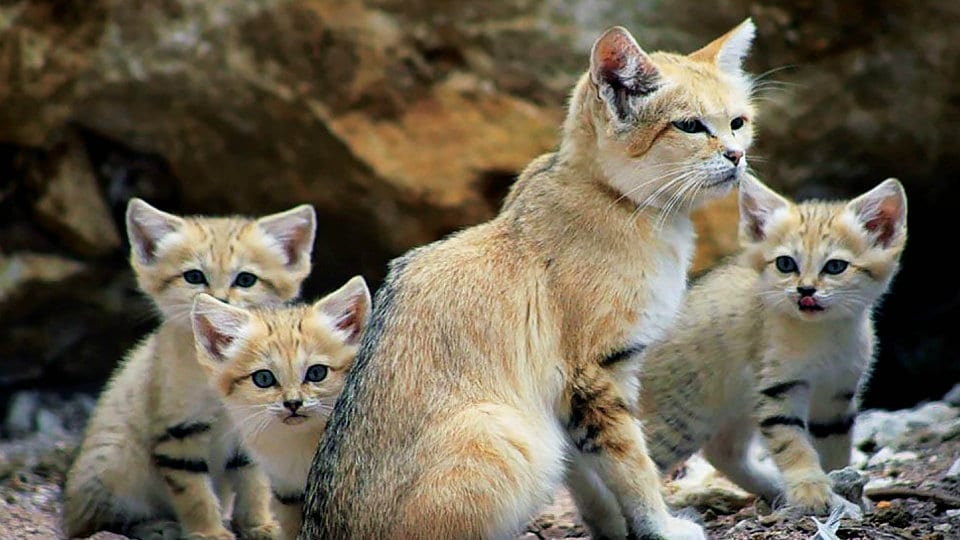 In this week’s Pet Talk,  Maneka explains why cats sometimes eat their own offspring

What are the most common mistakes people make when feeding a cat ?

Giving the cat too much food: Along with dry food, cats should only be fed two tablespoons of wet food, two times a day.

Insisting that the cat has vegetables in its diet: Cats are carnivores and do not need to eat vegetables.

Not understanding that your cat can be a picky eater: Take the time to find a food your cat enjoys.

Why do mother cats sometimes eat their own offspring?

• Threat from a predator.

• Kitten suffering from any genetic disease.

The mother cat kills her kittens if she feels threatened. If she thinks a particular place is not safe enough to bring her kittens up, then she tries to move them to another place. If she cannot find a more comfortable place, she kills them as she knows that there is no chance of survival.

Some cats become pregnant very early when their maternal instincts are still not fully developed. In such cases, the cats kill their kittens out of confusion, as the sound of the kittens triggers their hunting instincts.

Mother cat also eats her kitten which is suffering from any genetic disease or weakness; she does not want to waste her milk supply to feed it.

If a cat is suffering from starving after giving birth and is too exhausted to get to the food, she can eat her kitten. This can be prevented by providing food.

Some kittens die within minutes of being born, due to some inborn defect. In such cases, the mother cat eats the kitten to hygienically dispose of the body. Also, a dead body might rot, and give out smells that lure predators into her hideout. So, she eats the carcass so that no smell emanates from it.

Why do cats sit in a bread-loaf position?

This is called “loafing” and it could mean two things. If the paws are tucked in, the cat is comfortable and alert. If the paws are untucked, the spine is lifted and the head is down, it means the cat is in pain. Loafing with the paws out keeps the cat’s organs off a solid object (like a table), and when a cat’s organs are shutting down they are very tender. This position makes them more comfortable because of that. However, if your cat assumes the more extreme “meatloaf” position — slightly hunched, paws gathered under the body, nose resting on the floor, get her to a vet immediately.

In many cases if the animal is terribly wounded, has kidney failure or cancer, and no medical relief, it is possible. In order to prevent their undue suffering, it is often more humane to put them to sleep. But euthanising them simply because you are shifting cities, or the shelter is overcrowded, or the animal can’t find a home,  is wicked and immoral.

My dog stinks after a bath. What should I do?

Certain dog breeds, notably retrievers and hounds, have sebum oil on their coats that can, when combined with water and bacteria, emit a particularly foul smell.

If your dogs have sebum oil on their coats, completely drying them off as soon as possible with a blow dryer, after they get wet, will reduce the smell emitted from this dermal combination.

Dogs with parasites, bacterial skin infections, or yeast infections, can be particularly bad smelling when wet. These infections can get into folds of the skin and creases, where they multiply and cause skin problems that are both irritating for your dog, and smelly for everyone else. Addressing parasites, bacteria, and yeast conditions, with the appropriate medications, will relieve your dog’s discomfort and yours.

Groom your dog daily to brush off excess hair and debris. Make sure any discharge from eyes, ears, etc., and excrement and urine, is wiped off.

How do I stabilise an injured or ill bird until further assistance is available?

For minor cuts, beak chips or broken toenails that are bleeding, gently apply pressure to small cuts, with a piece of gauze/ cotton, to stop the bleeding. Be careful not to hold your bird by the chest, or compress his chest, as this can cause suffocation. In some cases, you may need to apply pressure for up to 10 minutes to stop bleeding. After the bleeding has stopped, clean the area with water and then apply styptic powder. You can also use cornstarch, baking soda or flour, if you don’t have styptic powder.

If the bird has a small, superficial, and non bleeding wound (not caused by an animal) clean the wound with betadine. Remove any dirt or feathers. Then apply a small amount of antibiotic ointment. It should heal within a couple of days.

Birds may have broken young feathers (also known as blood feathers as they still have blood shafts). To stop the bleeding from these feathers, apply pressure with a sterile gauze pad to stop the bleeding. After the bleeding stops, contact your veterinarian right away to see if it’s necessary to have the feathers removed.

If the bird has a broken wing, wrap the bird lightly with a cloth and immediately visit the veterinarian.

Often my pet dog makes a wailing sound. Why ?

Dog howling signals to other dogs that the area they are entering has been claimed and occupied. It is a warning to outsiders that encroachment risks the threat of violence. Howling dogs announce their presence, and alert their community, to changing circumstances.

The sound of a dog howling attracts the attention of his owner. May be you dash across the house to see what’s wrong, only to find yourself greeted by a dog who wants to be played with. If your dog knows that you leave for extended periods of time, he may howl as an expression of separation anxiety.

Dog howling can be a response to environmental triggers. Common provocations include ambulance, Police or fire-engine sirens.

It is also a long distance sound — when you hear howls at night, it could be to establish contact with the rest of the community.

What are the law pertaining to protection of peacocks in India?

The peacock is India’s national bird since 1963 and gets protected status under Schedule I of The Wildlife (Protection) Act, 1972. Killing of a peacock is strictly prohibited and, as per section 51(1-A), attracts imprisonment which may extend up to seven years and a fine which shall not be less than ten thousand rupees.

However, The Wildlife (Protection) Act, 1972, provides exemptions under Sections 43, 44(4) and 49(a) for transport, transfer and trade in peacock tail feathers for religious, cultural and traditional purposes within India. The latter is  a controversial issue as it has been raised in the courts time and again in order to issue a complete ban on trade. The peacock feather trade is completely dependent on killing peacocks, so to allow the sale and yet ban the killing is senseless.