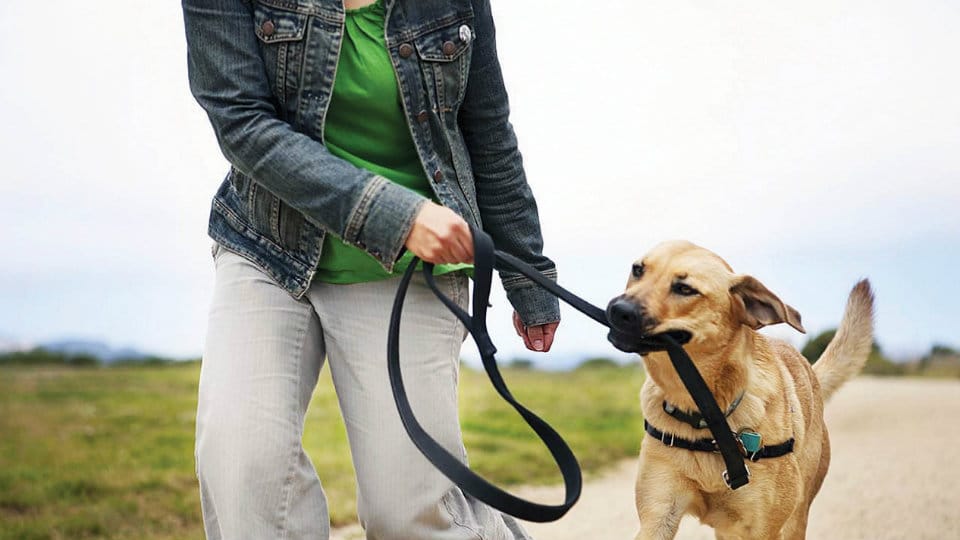 In this week’s Pet Talk, Maneka gives tips on how to prevent a dog from chewing the leash

Why do wolves howl?

The ancestors of domesticated dogs, wolves howl as a form of long-distance communication, conveying a range of information. Because of the high pitch, and the suspension of notes, the sounds of wolf howls can carry as far as 10 kilometres in the forest and even 16 kilometres across a treeless zone.

Wolf’s howls serve as GPS systems, sing-along and fire alarms — all rolled into one. In general, the primary reasons why wolves howl include:

• A rally cry for the pack to meet up; • A signal to let the pack know of a wolf’s location; • A warning for outside wolves to stay out of a pack’s territory.

My pet has a habit of sniffing and eating garbage. How to train him?

Your pet will be less likely to raid the trash can for food if he is well fed. Make sure your pet doesn’t go hungry, by feeding him small meals throughout the day. If you are trying to make him lose weight, provide him with high-fibre foods that will keep him feeling full for longer.

Your pet may wander into the trash can when you are gone, because he is bored. You can help to keep him out of mischief by engaging him with chew toys and providing plenty of exercise. Place the trash can in a cabinet, or at any place that is out of your pet’s reach.

Train your pet to stay out of the trash by teaching him that the trash can is off limits. If you see your pet nudging the trash can, or cabinet, clap your hands and say “off” in a loud and strong voice. Next time you see your pet sniffing or eating the garbage, scold him at that point of time so that he gets warned. If you scold him later, he will not realise why you are angry.

My dog keeps pooping all the time around the house. It’s not raining and it is not that I don’t take him out immediately after a meal. What should I do to curb this problem?

You may want to start with a call to your vet, especially if your dog’s stools are loose, or if he has diarrhoea. This could be a sign of gastroenteritis, when his colon or large intestines are inflamed. Possible causes include: • Parasites like roundworms, hookworms, and giardia; • Food intolerance or allergy; • Bacteria; • Viruses; • Inflammatory bowel disease; • Bowel cancer.

My dog has a habit of chewing the leash. Why and how should I train him not to?

One way canines release excess energy, or built-up stress, is by mouthing, tugging and jumping. When your dog is excited, the leash becomes a portable tug toy. High-energy, playful dogs are most likely to exhibit this behaviour and then turn it into a habit.

Some dogs chew on the leash as a way to get attention. When your dog is walking calmly on a loose leash, no one pays attention to him, but when he becomes a nuisance your attention shifts directly to him. For many dogs, this is what they want.

In most situations, dogs chew at the leash because they haven’t been shown a better alternative.

It’s possible you’ve accidentally been rewarding the biting all this time. It takes two to tug. When the pup grabs the leash, our impulse is to try to pull it away, or push the puppy off it. This is great fun for a puppy, because now you’re playing an exciting game of tug-of-war! In her little puppy imagination, you’re teammates tearing apart that leash, like wolves tearing apart a hunk of moose carcass.

Make sure all walking-without-biting gets rewarded. You can use treats, but you might have better results using a tug toy. Because, a reward can be whatever the dog wants at that moment. When your pup grabs the leash, he’s telling you what he wants: to play tug! You can teach him that by walking nicely on a leash he’ll get to play.

However, don’t start the training while on the walk when the pup is already excited. You can’t wait until your pup is on a walk, jumping and biting to introduce the concept of polite leash manners.

When the pup is calm hold the leash in your hand, don’t attach it to the dog yet. In a calm, boring fashion so as not to entice her to attack, dangle the leash a foot in front of her. For as long as she is not going after it, praise and offer treats. Remain calm, move slowly and move the leash slowly. You’re rewarding the absence of biting, so you can offer a treat for sniffing the leash, or looking at it, looking away, looking at you, staring into space, etc.

After three minutes, end the session. Get the tug toy and play a game. Get a long dog toy, like a knotted rope or a skinny stuffed animal. Teach the pup that this is the object she has permission to go nuts over.

Over the next couple of sessions, gradually make it harder. Move the leash more, drag it on the ground, wave it around. If the puppy bites the leash, drop it and gently hold her by the collar or harness. Stay still. Be boring. Wait for her to drop the leash. When she does, let go, praise and treat. When you can get through a three-minute session without her going after the leash, you’re ready to move on to the next step.

When this has become a habit, attach the leash to the puppy. Walk him across the room while talking excitedly or making funny noises to keep his attention. As long as he isn’t biting the leash, offer a treat every step. And if he bites the leash, drop it and take his collar.

Over a couple of sessions, gradually increase the number of steps between treats. When you can walk briskly in a circle around the room without him biting, it’s time for the next step — adding the tug toy.

Start with the pup off-leash. The tug toy in one hand and the leash in the other. Wave the leash in front of the pup’s face. When she ignores it, praise and tell her to get the tug. Play an enthusiastic but short game, about thirty seconds. Take the toy away and reset. Do three to ten reps of this, depending on your puppy’s attention span. Always stop before she gets bored and wanders off.

Next, puppy is on a leash. Walk her in a circle around the room, then reward with the tug toy.

Now you are ready for the street. Out in the world, your pup might lose interest in treats or the tug toy, wanting instead to run around or sniff things. That’s fine. Use the running around and sniffing as rewards for walking without biting. As long as she doesn’t bite, she gets to do those things. If she bites the leash, uh oh! Fun times are over. You drop the leash, hold the collar and be boring for a while.

My dog has gotten increasingly fat and lazy despite there being no change in diet or exercise. What should I do to make him active and playful again?

Lethargy, weakness and sudden tiredness are common signs of illness in dogs, but they are rather vague — lots of different problems can make your dog appear lethargic and weak. If your dog is getting on in years he may steadily become more lethargic. This could be due to osteoarthritis or other age-related conditions. If your dog is young but suddenly starts appearing weak, listless and lethargic, it may signify a more serious problem. This is especially the case if it’s accompanied by reduced eating or drinking. In either case, you should contact your vet for advice.

The most common causes of lethargy in dogs are: • Infection, including parvovirus, distemper, kennel cough and leptospirosis; • Metabolic diseases, such as heart problems, liver problems, diabetes, and hypoglycaemia; • Medications, such as newly prescribed drugs ,or a new flea or worm product; • Anaemia, which is often caused by parasites, such as a flea infection or intestinal parasite; • Poisoning, from toxic foods, such as garlic and onions; • Pain, trauma, diarrhoea, tumours, hypothyroidism.

Once the cause of your dog’s behaviour is ascertained, and the required treatment is undertaken, he is likely to show signs of improvement and a positive behaviour. Make sure to be available for him and devote time to play or walk with him. Depression in dogs can often be treated only by giving them some extra care, and if it is the cause of dullness in your dog, this little bit on your part is sure to go a long way.