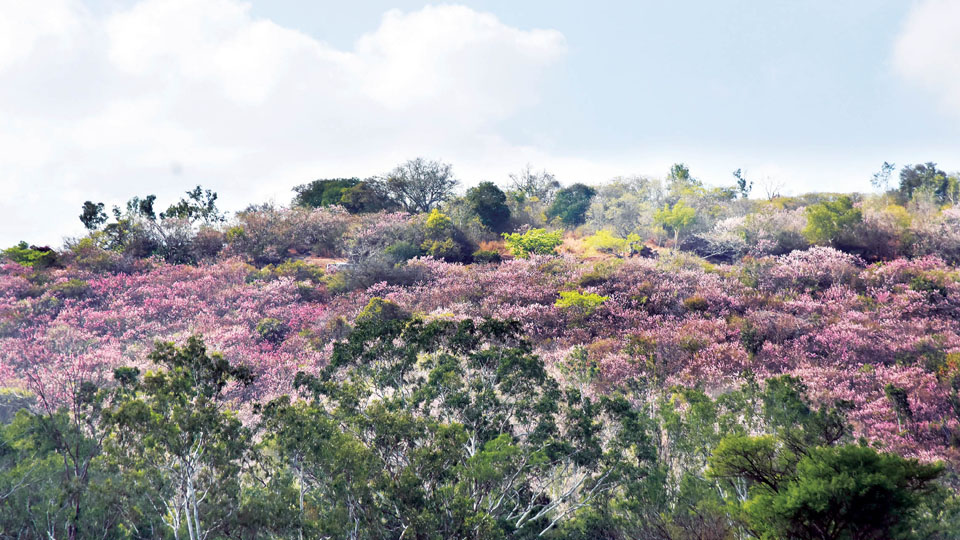 Even as the Chamundi Hill forests are now presenting a dull picture with dried up trees, shrubs and plants, pink flowers have started to bloom in full in the forests, much to the delight of visitors and tourists.

Just when the Chamundi Hill seemed to have lost life with vanishing of greenery due to hot sun, pink flowers in bunches have started blooming all across the forest. The plant which is known by its Botanical name Gliricidia Sepium, is also popularly known as a manure plant locally. This plant has naturally grown aplenty in Lalithadripura, Tavarekatte and Uttanahalli surroundings and bunches of pink flowers is a feast to the eyes. They look as if someone has dipped the whole surroundings in pink colour. These flowers apart from covering stretches create a cool atmosphere in the surroundings.

The plant, Gliricidia Sepium, locally known as Manure plant (Gobbarada gida) has its origins in Mexico and South American countries. This plant grows up-to a height of 10 to 12 metres and plays a vital role in maintaining soil fertility.

The plant is rich in protein and as such the leaves of this plant are often used as manure in farming. Due to its farm use, the plant is generally grown along farm edges. Due to its nutrient rich qualities, the tree leaves are fed to cattle and sheep. This multi-useful plant is very helpful to farming community.

The bark is smooth, and its colour can range from a whitish grey to deep red-brown. The flowers are located on the end of branches that have no leaves. These flowers have a bright pink to lilac colour that is tinged with white. A pale yellow spot is usually at the flower’s base. Gliricidia is also known as nitrogen fixer, thereby improving the quality of soil. It is for this reason, both Forest and Agriculture Departments are promoting cultivation of this plant species in dry areas, which can be propagated by both seeds and cuttings.

This plant has a rare quality of growing fast by itself. The Forest Department, realising the multiple uses of the plant, is promoting the cultivation of the plant in social forestry schemes. The Department is cultivating the plant in hilly terrains, barren lands and other waste lands where other plants have failed.

The plant is grown either by sowing the seed or planting a sapling. As the plant grows, the leaves helps in enriching soil fertility. This is one of the best plants used for traditional live fencing to protect agriculture and fruit-bearing plantations from animals such as goats, cow and buffalo.

Even as Chamundi Hill forest is blooming with pink flowers, the city too seems to be fast catching up as rare pink flowers are blossoming from Honge trees. Generally Honge trees give rise to white flowers. But the pink flowers this time at some locations has left the citizens delightfully dismayed.

Mysuru DCF Dr. K.C. Prashanth Kumar said that the manure plant, botanically known as Gliricidia Sepium has blossomed pink flowers. These plants do not grow that tall. The leaves of this plant have proved to be good natural manure, he said.

This plant also has the special quality of fertilising the soil in its surroundings. The tree branches are also used to feed cattle and sheep. The plant, with all its natural characteristics, is very much bio-friendly and is a boon to the farming community for its multiple utilities, he added.

At the outset, this plant (Gliricidia Sepium) is almost similar in physical appearance to Neelkurunji plants grown in hilly regions of Chikkamagalur, Ooty, Mettupalayam, Coonoor etc. Twelve years after cultivation, Neelkurunji plants unveil a flower-scape. The Neelkurunji flowers grown in the hilly surroundings of Ooty last year was a star attraction for visitors for four long months. The blue-coloured flowers seen all around Ooty attracted a large number of tourists too. Will the Pink flowers beckon tourists to Mysuru?