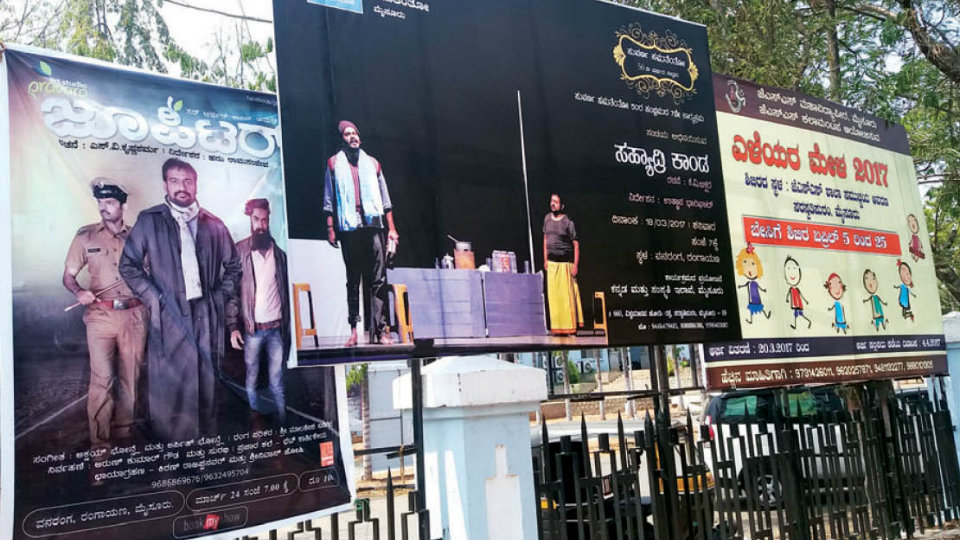 While the Mysuru City Corporation (MCC) has banned the usage of plastic flexes, buntings and banners in city, the rule doesn’t seem to apply for Kalamandira and Rangayana premises.

Kalamandira premises has literally become a plastic fortress with plastic flexes erected by amateur theatre groups and institutions to advertise their upcoming events.

Earlier, the Kalamandira authorities had banned plastic banners in the premises but now amateur theatre groups have slowly started to erect plastic banners.

This apart, a few banners and flexes can also be seen near  the Rangayana reception and Kalamandira as well.

“Rangayana does not encourage the use of plastic flexes and banners. Instead, the banners are hand-written by the artistes on the canvas which is placed at the repertory’s entrance. With respect to plastic banners and flexes erected, it is the Department of Kannada and Culture that has to take action,” said Rangayana Deputy Director Nirmala Matapathi when asked about the plastic flexes dotting the premises.

The banners seen in the premises are the ones which are placed by amateur theatre groups that have organised the staging of plays at Vanaranga in Rangayana premises, it is learnt.  Though Rangayana has not erected the plastic flexes,  it should deny permission for such theatre groups that use plastic flexes to stage plays at the theatre repertory.