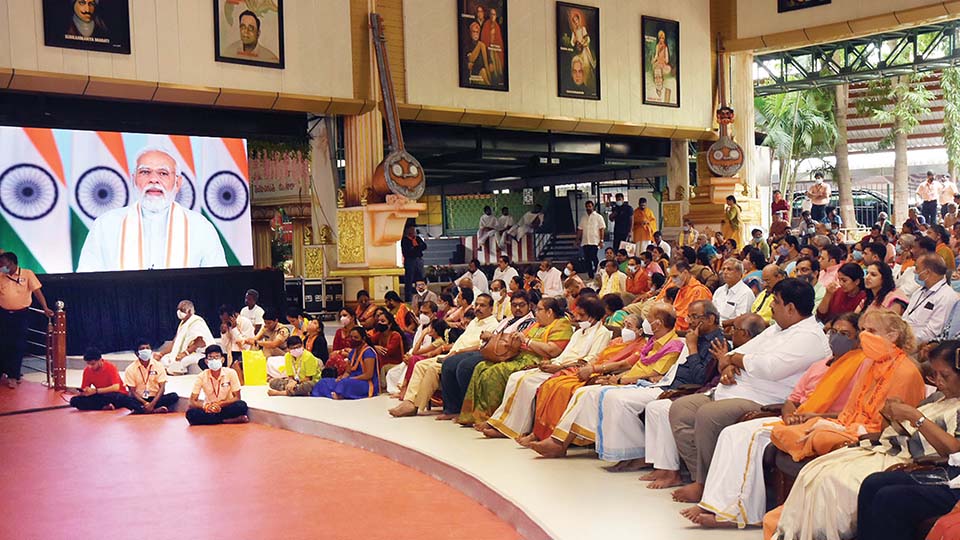 Mysuru: Prime Minister Narendra Modi lauded the efforts of Avadhoota Datta Peetham on Nanjangud Road in city for nation building and to build a good society. He was virtually addressing the devotees and religious heads this morning as part of the 10-day 80th birthday celebrations of Sri Ganapathy Sachchidananda Swamiji, the Founder Pontiff of Avadhoota Datta Peetham.

Beginning his speech in Kannada, the Prime Minister wished Sri Swamiji on his birthday and said the Avadhoota Datta Peetham has made giant  strides in building a better society and a strong nation.

Pointing out that the measures taken by the Swamiji for the welfare of the society has brought him happiness, he said that these measures are a guiding force to others. Noting that the Seer is blessed with divinity by Gurudeva Datta, the PM said that the works of  Saints, spiritual Gurus and other such religious leaders have been inspirational to the society.

“Sri Ganapathy Sachchidananda Swamiji is a living example of Godly service to the society. His Ashram has taken spirituality to much greater heights. The Swamiji’s contributions can be seen in all initiatives right from Swachh Bharat campaign to ‘Local to Global’ campaign. Besides, his expertise in spreading spiritual knowledge to the world is exemplary,” Modi said.

Sri Tridandi Chinna Srimannarayana Ramanuja Jeeyar Swamiji of Hyderabad, who graced the inauguration, said that Sri Ganapathy Sachchidananda Swamiji did not care for his physical comforts and instead showed a lot of concerns for dharma and salvation.

“We know the Swamiji is always concerned for the health of the society and the nation. It is important to make people see brotherhood and to make them feel that they are supported by divine energy, which the Swamiji has been doing for decades,” Sri Jeeyar Swamiji said.

District Minister S.T. Somashekar lauded the services of the Swamiji during the COVID pandemic. Pointing out that the Seer donated generously when he sought his help, Somashekar recalled that the Ashram extended full support in the distribution of food kits.

MLA S.A. Ramdas said that marking the 80th birthday celebrations of Sri Ganapathy Swamiji, the Government has planned to build a Circle near the Toll Gate on Mysuru Road and name it as Sri Ganapathy Sachchidananda Swamiji Circle and to start a music therapy section at Jayanagar Government Hospital in association with the Ashram.