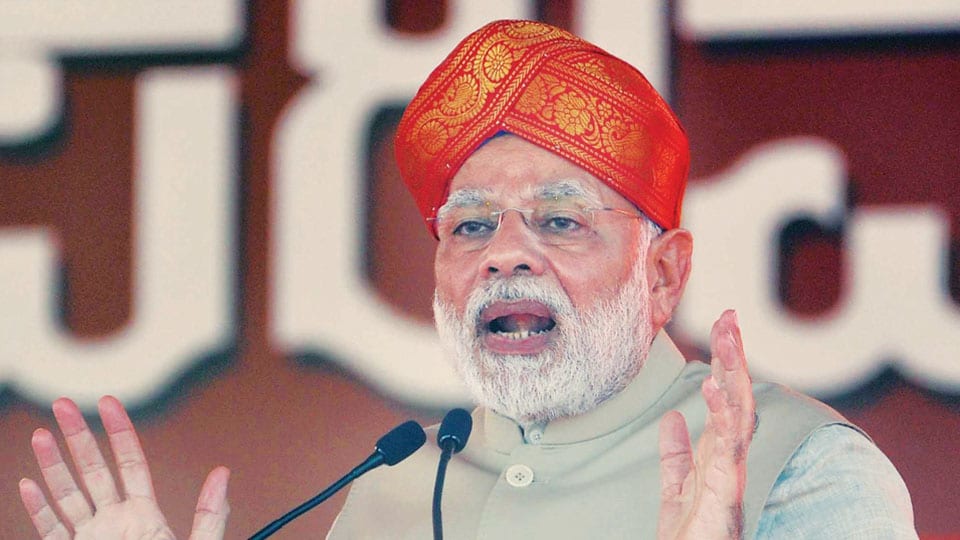 Bengaluru/Mysuru: Prime Minister Narendra Modi, who is arriving on June 20 for a two-day visit to the State to take part in the International Day of Yoga (IDY) event at Mysuru on June 21, will visit the Sri Chamundeshwari Temple atop Chamundi Hill during his stay in Mysuru.

This information is according to the tentative itinerary confirmed by the Government sources in Bengaluru yesterday. However, the final call on the itinerary will be taken by the Centre and as of now, there is no official word on the PM’s schedule.

The PM’s schedule available now says that Modi will hold talks with members of the erstwhile Mysore royal family at the Palace premises where he is scheduled to take part in the IDY event on the morning of June 21 (6.30 am to 7.45 am).

After the event, Modi will attend a programme at Dasara Exhibition Grounds, after which he will spend about half an hour (8.30 am to 9 am) with members of the erstwhile royal family. The PM will later leave for Thiruvananthapuram in Kerala by a special flight.

PM Modi, who will arrive in Bengaluru on June 20 afternoon, will proceed to lay the foundation stone for the Bengaluru Sub-Urban Railway project, following which he will address a public gathering. Thereafter, he will take part in the inauguration of the new campus (costing Rs. 250 crore) at Bengaluru’s Dr. B.R. Ambedkar School of Economics (BASE), following which he will leave for Mysuru in the PM’s chopper.

During his stay in Mysuru, Modi is also expected to visit Suttur Mutt and also Chamundi Hill Temple and will stay for the night on June 20 at Radisson Blu Plaza Hotel.

During the inauguration of the new Campus of BASE in Bengaluru, the PM will also launch the newly upgraded 150 Government ITIs, which has been done at a cost of Rs. 4,500 crore in association with TATA groups.

Meanwhile, the authorities have instructed Mysuru’s Chamundi Hill Temple staff to mandatorily wear uniforms on June 20 and 21 as PM Modi will be visiting the Hill Temple.  As per the instructions, all staff, including security and cleaning personnel, are required to be on duty on June 20 and 21 wearing uniforms without fail. Also, all employees are asked not to take leave from June 11 to 25. Chamundi Hill Temple Executive Officer has warned that the wages of staff who absent themselves from duty or go on leave during this period will be deducted from their salaries and disciplinary action will be taken against them.