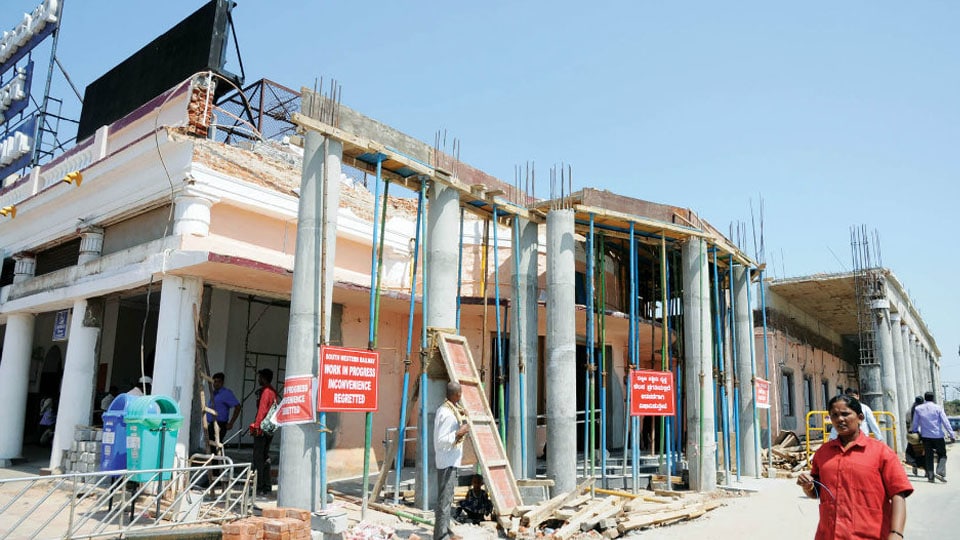 Mysuru: The Railways have decided to temporarily stop the re-development works at the annex site in the City Railway Station for a couple of days following the visit of the Tourism Minister S.R. Mahesh and Deputy Commissioner Abhiram G. Sankar to see if any violations of norms were indeed there, so that the Railways’ stand could be appreciated well.

In a press release here this morning, Senior Divisional Commercial Manager and PRO (Public Relations Officer) S.G. Satish has stated that a section of the press had carried news alleging violation of heritage norms in the ongoing civil works for provision of upgraded amenities to rail-users. It is once again reiterated that the Railways have taken great pains to ensure that the heritage element and value of the Railway Station building is not compromised.

He pointed out that Minister Mahesh had assured that in a day or two after his visit, clearances, if any, shall be issued. However, it is also to be noted that the Minister had visited and inspected the Railway Station earlier and had assured that the DC would visit the site.

Meanwhile, the Minister had expressed satisfaction and appreciation for the ongoing works and had given in principle approval, claimed Satish in the release.

Mysuru-Kodagu MP Pratap Simha,  who also visited the site, had expressed satisfaction at pace of work. He was also appreciative of the Railways’ determination and Central leadership role in continued and sustained efforts for improvement and development, said the PRO in the release.