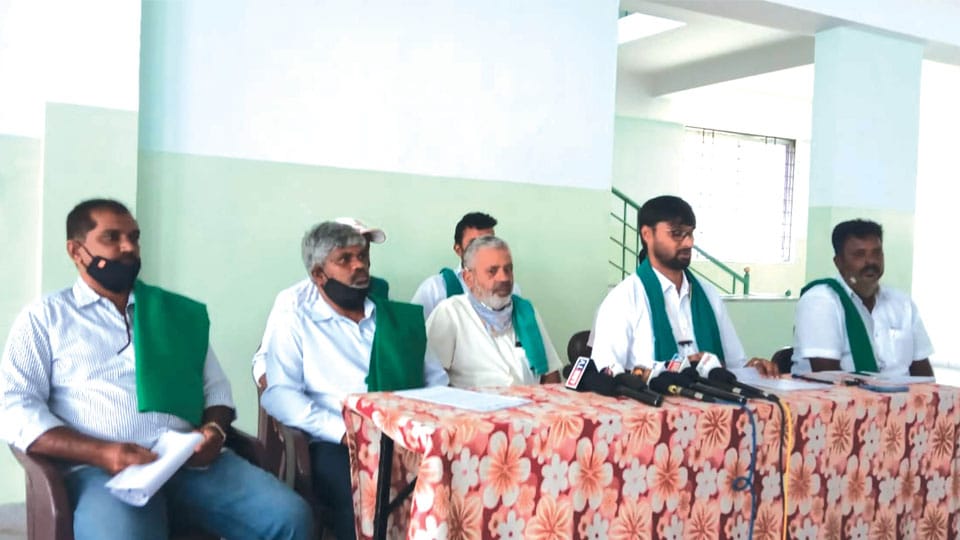 Mysore/Mysuru: Contending that the Government had failed to attend to the problems of farmers in the State, members of Samuhika Nayakatvada Raitha Sangha and Hasiru Sene will be wearing black bands on their wrists and holding a protest march from Deputy Commissioner’s Office to City Court premises on Aug. 15.

Disclosing this at a press meet held at Leela Chennaiah Kalyanamantap on Valmiki Road at Paduvarahalli this morning, Raitha Sangha State Core Committee Member Manju Kiran said, “As a protest against the Government’s move to amend the Karnataka Land Reforms Act and others related issues, farmers will be observing a ‘black day’ on Aug. 15. We would like to strongly condemn the statement given by ruling BJP Ministers that our protests are sponsored by Opposition parties. The administration is testing our patience, but we will continue our agitation against this shameless Government.”

Farmers, under the leadership of Thinker Chukki Nanjundaswamy, will be holding a protest march from Deputy Commissioner’s Office to the bust of Mahatma Gandhi in front of City Court complex on Aug. 15.

“Earlier, we had planned to hold indefinite strike from Aug. 15, but farmers now are engaged in agricultural activities due to good rains in recent days. Hence, we have postponed our plans to go on indefinite strike,” he said