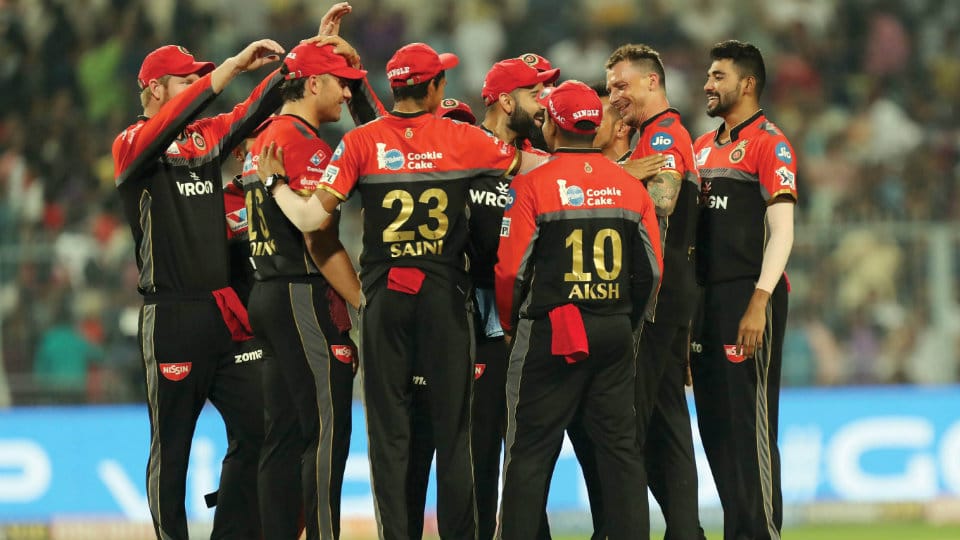 RCB beat KKR to stay alive in the Tourney

Andre Russell (65) and Nitish Rana (85 not out) played power-packed innings but failed to help Kolkata Knight Riders (KKR) cross the line as they lost by 10 runs against Royal Challengers Bangalore (RCB) managing to score 203/5 in the stipulated 20 overs at the Eden Gardens in Kolkata yesterday.

The win keeps RCB mathematically alive in the tournament while KKR suffered their fourth loss in as many games.

In the chase, KKR got off to a terrible start with Robin Uthappa wasting far too many deliveries. Rana and Russell were the lone hope for the franchise as the forged a 118-run fifth wicket stand.

However, a fine penultimate over by Marcus Stoinis helped RCB restrict KKR in the chase.

Earlier, Virat Kohli notched up his fifth century to rescue RCB from a slow start and post 213/4 against KKR.

Put in to bat, RCB lost Parthiv Patel early. His fellow opener and skipper Kohli did not time the ball well early on but then went to play the role of a sheet anchor as the visitors posted a challenging total on a belter of a track.

Kohli was helped on with a rampant half-century from Moeen Ali (66), whose 28-ball knock was five boundaries and six sixes. Following Ali’s dismissal, Marcus Stoinis (17) played an important cameo to help the visitors in their cause. For the hosts, Sunil Narine, Andre Russell and Kuldeep Yadav picked a wicket each.