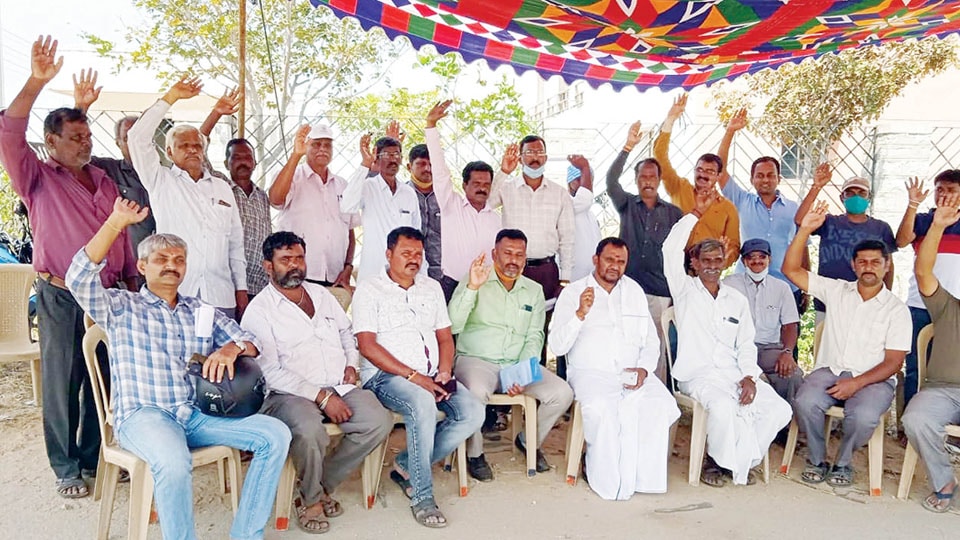 Residents protest over setting up of waste disposal facility at Sathagalli

Mysore/Mysuru: The residents of Sathagalli and surrounding places staged a protest yesterday morning against disposal of waste in the 19.9 acre land adjacent to Visvesvaraya Technological University (VTU) Regional Centre at Sathagalli Layout and urged the authorities to construct a stadium on the said land.

The protestors said that the Mysuru Urban Development Authority (MUDA) had handed over the said land to the Mysuru City Corporation (MCC) for setting up of waste disposal facility and added that it was unscientific to set up the facility close to residential areas, college and hostels as it would pollute and spoil the environment. Everyday, a large number of people use this road and many residents of surrounding areas such as Manasi Nagar, Hanchya, BSNL Layout use the service road along the Ring Road for their morning and evening walks.

Considering that a number of Police personnel, who had taken part in the operation to nab Veerappan were also residing in this area, setting up of a waste disposal facility and dumping of waste materials here would pave way for spread of epidemics and other ecological issues for them, the protestors claimed.

The protestors also said that there is Kaadanakatte Lake in the said land, which is filled with water and used by many. As of now, the residents were facing problems of illegal activities, menace of pigs and fear of burglars, which would only increase if the waste disposal facility is set up, they added.