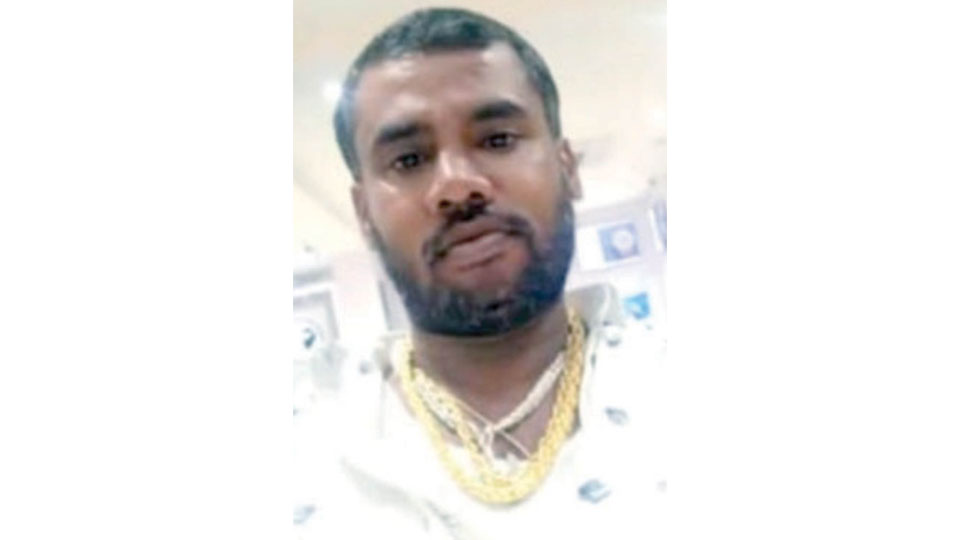 K.R. Pet: A rowdy-sheeter was brutally hacked to death by a group of miscreants at a temple premises in K.R. Pet yesterday morning and old enmity is suspected behind the murder.

The deceased rowdy-sheeter has been identified as Arun alias Allu Arun (38) who was involved in murder, kidnapping and extortion cases among others. Arun was also banished from K.R. Pet for his involvement in criminal activities. On Monday at about 9.30 am, Arun, who was staying in Mysuru, left for Eshwar Temple on K.R. Pet-Shravanabelagola Road on his relative Praveen’s bike. As soon as he (Arun) entered the temple premises, a group of five to six miscreants, pounced on Arun and brutally hacked him to death with lethal weapons in the temple premises and fled from the spot.

Details: Deceased Arun, a notorious rowdy-sheeter, had served jail terms in two murder cases and was also involved in hafta collection from politicians, businessmen and others. Fearing him, many had refrained from lodging Police complaints.

A tender coconut vendor earlier, Arun took to crime later. Arun and another rowdy-sheeter Yatish, who was his friend, wanted to gain supremacy in rowdyism and a clash had taken place between them which turned into enmity.

In 2009, the gang members of Yatish had attacked Arun and he had survived the brutal attack. In a bid to take revenge, Arun, in 2012 had hacked to death Bhaskar, the right hand and very close associate of Yatish. As there were no strong evidences against Arun, he was acquitted in the case. In 2016, Arun had murdered Yatish’s brother Rajesh on his (Rajesh) birthday and landed in jail.

Even in jail, Arun had hatched a plot and had got K.R. Pet goldsmith Gopal kidnapped for Rs. 1 crore ransom. Arun later got him released after receiving a few lakhs of rupees.

Meanwhile, it is suspected that Yatish, who was waiting for an opportunity to take revenge for Bhaskar and Rajesh’s murder, may have killed Arun, but still, the Police are investigating in all angles.

Arun was released from jail three years ago after serving jail sentence in Rajesh’s murder case and on his arrival to K.R. Pet, Arun was banished from K.R. Pet by the authorities concerned. Even after the term of his externment period ended, Arun used to stay in Mysuru but was visiting Eshwar Temple in K.R. Pet every Mondays, perform puja and used to stay in the temple premises for more than half-an-hour. The killers, who had observed Arun’s movements, laid in wait for Arun to come to the temple and upon his arrival, the gang attacked Arun with lethal weapons and hacked him to death.

K.R. Pet Town Police, who have registered a case, are investigating.