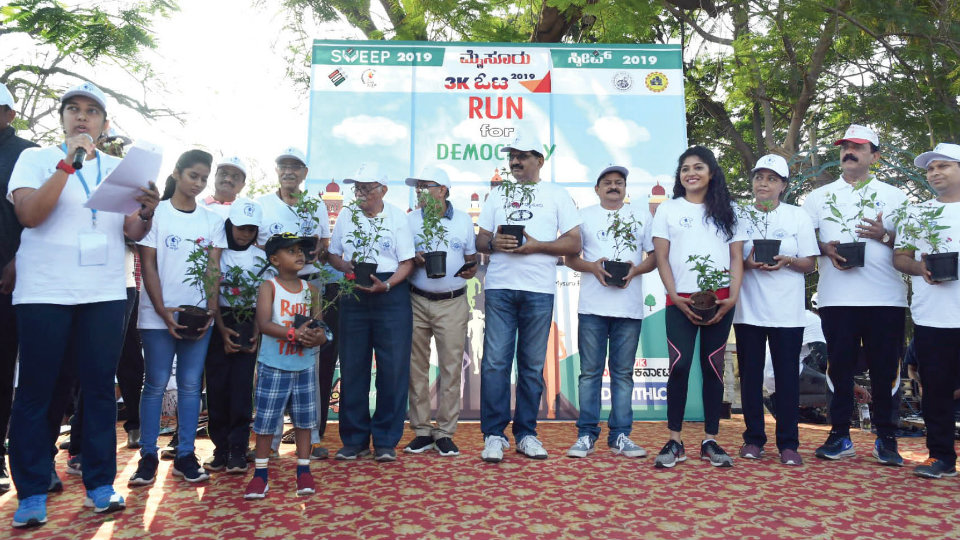 ‘Run for Democracy’ to create voter awareness flagged off in Mysuru

Mysuru: The District Administration, Mysuru City Corporation, SVEEP (Systematic Voters’ Education and Electoral Participation) and other organisations had jointly organised ‘Run for Democracy’ a 3-km run to create voter awareness, in the city this morning.

The nonagenarian former VC Prof. B. Sheik Ali flagged off the run in front of Kote Anjaneya Swamy Temple at 7.30 am in which around 350 runners participated. The runners passed through K.R. Circle, Devaraj Urs Road, JLB Road, Metropole Circle, Vinoba Road, passed through Chikkagadiyara, Gandhi Square and ended at Town Hall.

Prof. Sheik Ali said no country is like India, no State like Karnataka and no city like Mysuru in the world. This effort on the part of the organisers to bring about awareness to vote in this general election is a great initiative.

MCC Commissioner Shilpa Nag said the efforts by SVEEP committee to bring about the importance of voting is really commendable as they held various programmes to see that the voter turnout increases in the Apr.18 election.

Humorist Prof. M. Krishnegowda said that it was a sad state of affairs in the country that even after 70 years of independence the voters have to be told about the importance of their votes. While they are very keen to go to a particular hair stylist, wear a particular brand of clothes, they do not show the same keenness in voting the right candidates which shows the utter negligent attitude regarding the importance of democracy, he regretted.

Actor Mandya Ramesh said the voters’ apathy to go to the polling booth to cast their votes shows the uncivilised behaviour of the voters and initiatives like this would go a long way in provoking them to vote.

TV actor Sudha Belawadi said the voter must understand that at least they have one weapon against the netas and that is their right to exercise their vote.

Later, the students of Vidya Vardhaka College of Engineering (VVCE) held a voter awareness drive at their college with a poster presentation. ZP CEO and SVEEP District President K. Jyothi who launched the awareness drive, lauded the efforts of the students in this self-driven initiative.

Most of the students are first time voters and one should understand the SVEEP’s efforts to bring about awareness among the voters. Sometimes the voter turnout in spite of the best efforts is not encouraging and hence it becomes very important for the young voters to cast their votes, she said.

VVCE Principal Dr. B. Sadashivegowda, Electronic and Communications Head of the Department Dr. C.M. Patil, SVEEP Secretary Krishna and others were present.