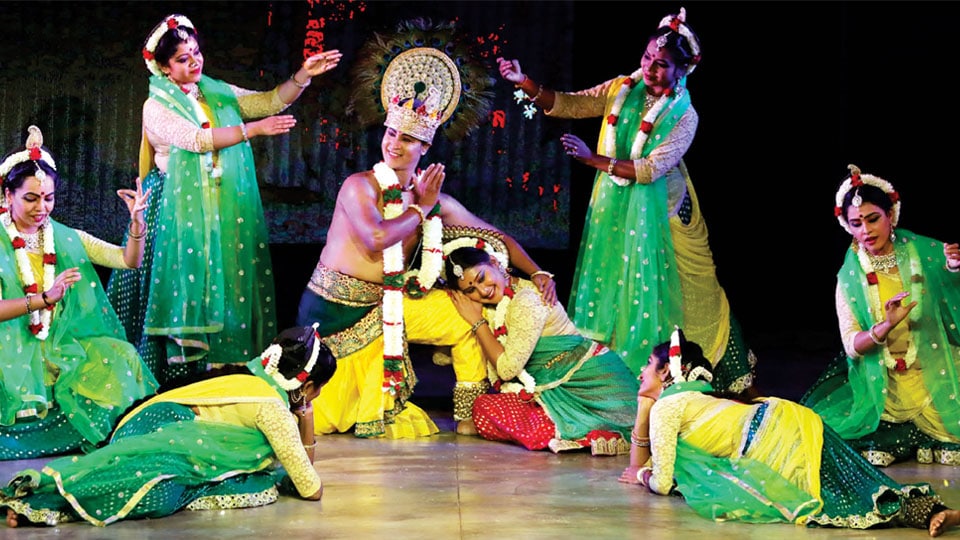 It was every time scene of projecting four different artistes in different dance forms in Articulate Festivals that is celebrated on every 3rd Sunday of the month but this 3rd Sunday of February 2019 was different. It was an evening of two enthralling choreographic works. One in Kathak and other in Bharatanatyam. The event was held at Ganabharati in Kuvempunagar. “When we say Classical Dance, it does not necessarily mean to go through a margam, but suffice if the language is classical format while the content could be thematic,” says the curator Mysore B. Nagaraj who has been satiating the thirst of Mysore’s nrutya kala rasikas for more than two-and-a-half years now.

Articulate Dance Studios, Bengaluru, under the guidance of Guru Mysore B. Nagaraj, has been tutoring aspirants in Kathak for nearly a decade now. The performing unit presented a weave of Bindadin Maharaj’s compositions. Starting with a Lakshan Geeth, “Niratata Dhang” where Bindadin is inspired by the movements of Krishna in his dream, that became the grammar of his style of Kathak, later identified as Lucknow Gharana. Interspersed with anecdotes of esoteric meaning like the fair Gopis mistake the dark hands of Krishna as a black snake when he gently rests on their shoulder. Bindadin’s prayer that there be no pain in his body, is all that he wish, for his body is an instrument of worship and dance for him was an act of devotion touched ones heart. The choreography strung together three thumris to express the feelings of the Gopis of Brindavan whose beloved was Krishna.

Krishna waylaying the Gopis who were on their way to fetch water from the river in the composition “Kahe Rokata dagar pyare”, the Gopis who waited in their home for arrival of Krishna and when he came, on seeing tell tale signs of his dalliance with other women explored the Vipralabda and the Khandita Nayika aspect in two compositions — “Aavata Shyam Lachaka Chale mukutadhar”  and “ Kahe ko mere Ghar aaye ho.”

Thus leaving Krishna bewildered by the act of loving anticipation in one moment and rejection in another. A Gath Bhaav format of Kathak was adapted to reveal the Abhisarika nayika bhaav where Krishna is made to become Radha even for a moment to understand her pure love towards him and what he went through while she was in search of Him. The feature concluded with a bhajan “Jhoolata Radha Navala Kishore.”

The Interpretative meaning of the sahithya was astounding, bringing in comparison of the dark cloud to Krishna, the lightning to Radha, the entire night sky was Krishna while the face of Radha was the brilliant Moon and the stars were the Sakhis. When the monsoon rains bursts, Krishna bends over Radha in protection while his feathered crown becomes the bejewelled parasol. Seemed like watching Kangra paintings come live.

Mysore B. Nagaraj as Bindadin acted as sutradar to unfold the emotions. His art of storytelling was simply awe-inspiring. His knack of connecting the segments to reveal the longings of the Gopi was splendid.

Laxminarayan Jena as Krishna was at his impish best, prancing to the beats and melody like a spring chicken, his expertise in the art form was noticed when by mere flipping the veil over his shoulders transformed himself into a gender that was opposite to his own in such refined manner and brought out the excitement of meeting Krishna, pain and sufferance of waiting and the disappointment that ensued was remarkable. He surely will raise high on the horizons of young dancers of India.

Dr. T. Prarthana was an epitome of grace depicting Radha and was simply angel like in the company of Krishna. Subtle and controlled expressions is just what a Kathak dancer needed, and that Prarthana had in her that brought out the emotions so well. The other artistes Aarabhi,  Chandana, Pushpa,  Pojashree,  Yashaswini, Vydeghi  and Bhavani  gave wonderful support to the whole feature with their very disciplined and well-executed movements that the choreography demanded. This feature befittingly demanded a standing ovation and the prekshaka exactly did that. The choreography of Mysore B. Nagaraj and the Music-Vocals by Pt. Shankar Shanbhogue was just breathtaking.

Under the artistic direction of Guru Sujatha Venkatesh, of Omkara School of Indian Dance, Geneva, Switzerland, a thematic dance feature was presented in the second half of the Festival.

Jala (Water) was its theme. Sujatha, through the medium of Bharatanatyam, brought out  the importance of saving our water bodies. Preciousness of life keeping-life saving liquid of the planet. Not only for the survival of the humans but also for everything on the face of earth both that breath and that which does not. An interesting aspect of the music is the employment of various languages of India and music style ranging from classic to folk to spiritual to ritual and contemporary. The choreography employed Bharatanatyam as its base but interestingly blended folk and contemporary movements in its dance tapestry. This brought out the universality of the concept.

The feature traversed through traditional Hindu Sandhyavandane on the banks of the river, the holy waters used in Baptism in Christianity, the cleansing water in Islam, the purificatory waters for the dead in Buddhism gave a sense of its sanctity across religions. Obeisance to the daughter of Himalayas, who flowed across the land making it fertile and the resulting joy of harvests was expressed through Kannada, Tamil and Telugu literature. The final aarati to the waters ended this feature while awakening in us a sense of responsibility towards this most important element.

Lead by Sujatha Venkatesh, her daughter-disciple Divya Venkatesh joined in this journey  to present this well-choreographed feature. The costume colour reflected the water making this uni-tone so perfect for this theme. The use of visuals was well-conceived and added to the story. Music directed by Praveen Rao was effective in driving the theme home. In conclusion, the dance feature moved the spectator from lethargic attitude towards wasting water to attentive attitude towards preservation. The other artistes who added their lively energy to this well-conceptualised dance feature are Surya N. Rao, Sreenivasan Rajendra, S. Yogesh Kumar, M.R. Madhuchandra, Padmini Upadhya,   Deepa Hegde, Nikhitha Manjunath, Krishna Tejaswi Konduri, Archana and Chetana.