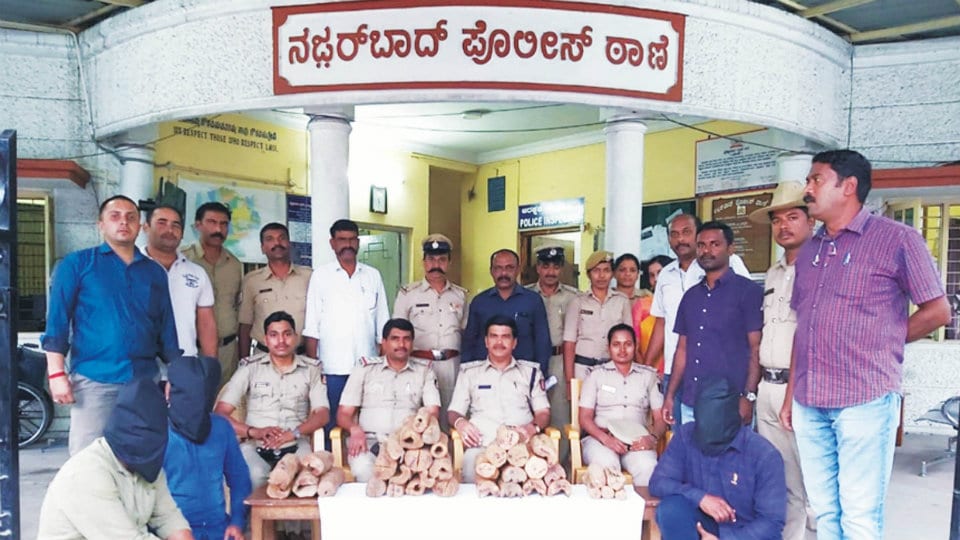 Mysuru: In separate cases, Nazarbad Police and the City Crime Branch (CCB) Police have arrested three sandalwood thieves and another person on charges of illegally storing red sanders logs to be smuggled to the international market and have recovered 45 kg sandalwood billets and 750 kg red sanders logs, totally worth Rs.83.6 lakh from them.

In the first case, Nazarbad Police, who were investigating sandalwood thefts in their jurisdiction, conducted a special operation and arrested 34-year-old Harris Iqbal of Rajivnagar on Dec.19 and during interrogation, the accused is said to have confessed of chopping and stealing a sandalwood tree grown in the premises of Gopala Gowda Hospital along with his two accomplices.

Based on the information provided by Iqbal, the Police arrested his two accomplices ­— 29-year-old Wasim Akram of Rajivnagar and 31-year-old Syed Mujar of Mandi Mohalla — and interrogated the trio during which they are said to have confessed of stealing sandalwood trees at three places in Nazarbad Police limits.

Following the information provided by the accused, the Police have recovered 45 kg sandalwood billets worth Rs.3.6 lakh from them.

In the second case, the CCB Police on Dec.20 raided a house on Pulikeshi Road in Mandi Mohalla where red sanders logs were illegally stored to be smuggled to the international market and arrested one person, who was sitting inside a Toyota Qualis in front of the house.

The arrested is 32-year-old Fairoz Ali Khan of Pulikeshi Road in city. During interrogation, the accused is said to have confessed of illegally purchasing red sanders wood from other State, store them illegally and smuggle them to international market in ships. The Police have recovered 80 red sanders logs weighing 750 kg and worth Rs.80 lakh which was stored in the house and also kept in the Toyota Qualis vehicle.