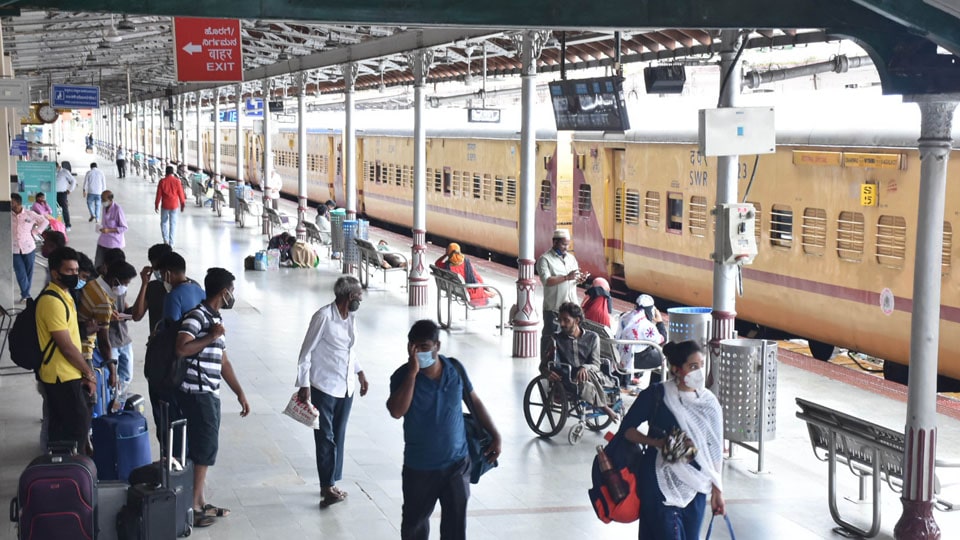 I underwent some inconvenience during last week while travelling in the train from Davanagere to Mysuru and today from Mysuru to Bengaluru.

Thanks to Indian Railways for immense facilities and comforts provided to its commuters in Railway Stations and inside the trains. But many a time, the coach halting display and the stoppage of similar coach differs on platforms and commuters have to rush towards their coach which is one or two coaches here and there. Exact halt of the train in platforms as per display have to be ensured with strict instructions to the Engine Pilots.

The battery vehicle is also not being put to proper use. The driver of the battery vehicle will not lift the phone. I request the Railway authorities to see that the driver receives the phone and accommodate on priority that passenger who had called him.

The driver also refuses to ferry senior citizens if they carry one or two luggage bags or trolleys. How can the passenger travel without  luggage?

Even though the vehicle has to run free of cost, I recommend the Railways to charge a specific amount to carry the passengers from platform to main entrance of the Station.

I also request the Railways to increase the number of vehicles which may cater to the need of passengers during peak hours.

Regarding ‘Where is my train app’ I must say that it is a wonderful tool to passengers with many information, which shows the  location, time, distance, speed etc. But for some trains  like Dharwad-Mysuru night express, exact coach position is not revealed and even the coach positions if revealed would be different. The platform shown in the app and the exact platform where the train is stationed in platform would  be different.

For example, the platform for train 12610 MGR Chennai Central SF was shown as 6 till I reached Mysuru Railway Station and came to know that the train was stationed in platform 3, which made me to run carrying my luggage. I suggest for updating  of information as and when change is there.

Also the concessions provided to senior passengers in respect of train fare was stopped along with the stoppage of trains due to Covid-19. However, the functioning of Railways have now been resumed in full swing. Passengers are being levied more fare inserting the tag ‘Special or Super Fast’, even though it takes the same time as earlier.

On behalf of senior citizens, I request that the concessions as earlier may please be resumed.