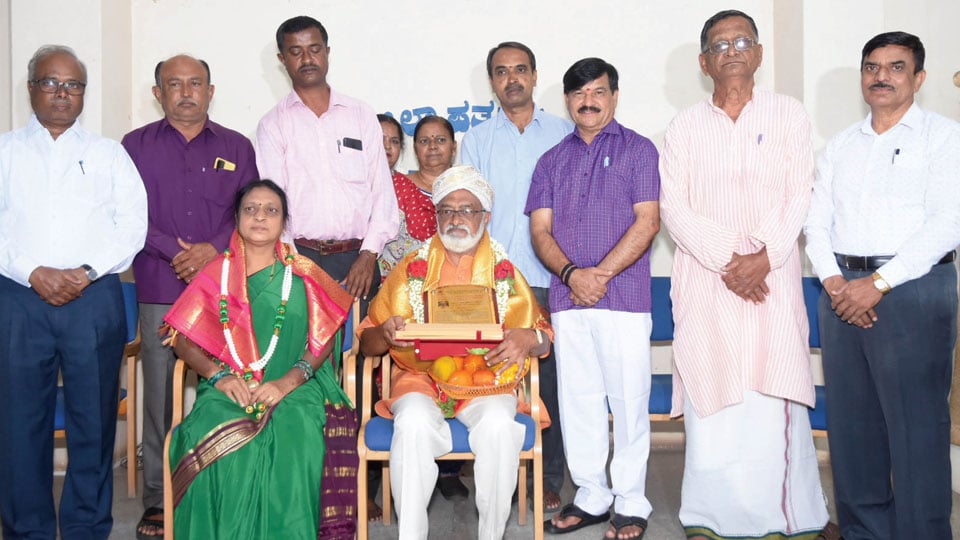 Mysore/Mysuru: Veteran journalist D.S. Harish was conferred with Sri Shivarathreeshwara Media Award at a function organised jointly by JSS Mahavidyapeetha and Mysuru District Journalists Association (MDJA) at Pathrakartara Bhavan yesterday. The award was presented in recognition of his dedicated service in the field of journalism spanning over 40 years.

MLA S.A. Ramdas, who spoke, said that Harish is an honour to journalism. “Mysuru and journalists have a relationship of over a century and the journalists of Mysuru city can be found all over the world. It is said that journalists, judges and politicians are learned people. Bringing out a Daily is like an every day delivery and a lot of efforts are associated with it. Unfortunately, values are declining in the industry and it is the duty of all those associated with it to uphold the values associated with journalism,” he added.

Writer G.S. Ramachandre Gowda, who also spoke, opined that Harish as a journalist mingled freely with everyone and has gone through lot of hardships in his life. “We are all proud of Mysuru journalists. But of late, it is sad to notice some of the present lot are lacking commitment while discharging their duties and it is better if they show more commitment,” he advised.

JSS Mahavidyapeetha Director (General Administration)  Shankarappa said, Harish is being honoured because of his work and commended the work of newspapers during COVID pandemic.

Harish, who spoke after receiving the award, said that previously, politicians were scared of journalists and the Government used to co-operate with journalists in times of difficulties in solving the problems of the people but not anymore and only journalists are responsible for this. “Today, newspapers are owned by businessmen and journalists have to work according to their instructions. Earlier, journalists used to have communications with politicians but now they have relationships with them and they are doing everything except what they are supposed to do. Of course, salary is important but journalists should work with larger interests of the society in mind,” he said.