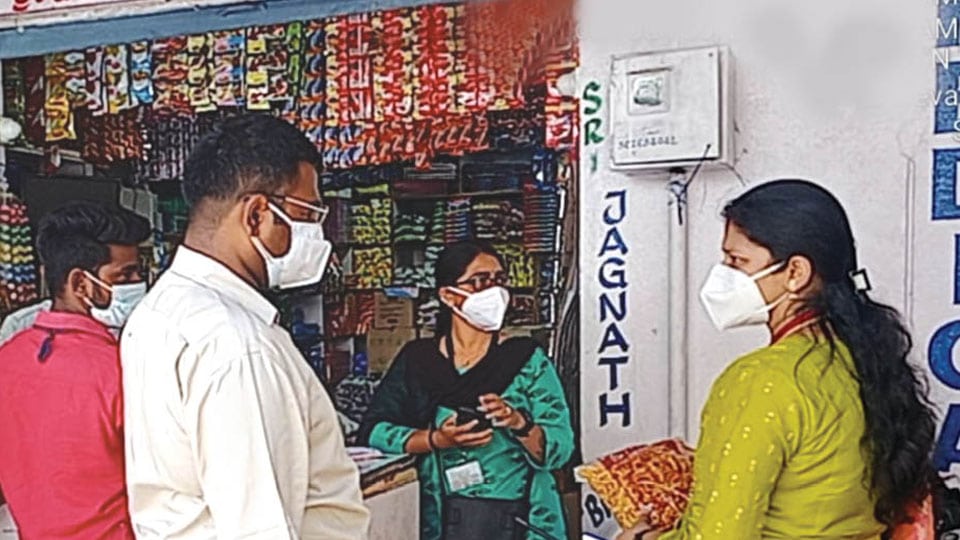 Mysore/Mysuru: The Mysuru City Corporation (MCC) officials, who conducted operations at Santhepet, Shivarampet and near Dufferin Clock Tower yesterday morning, have imposed fines on those who were found not wearing face masks and have also levied fine on a shopkeeper for selling packed snacks which had expired.

Yesterday morning, MCC Zone-6 Assistant Commissioner Karthik, Environmental Engineer S. Mythri, Health Inspector Rajeshwari and members of the MCC’s Abhaya team were creating awareness on COVID prevention in and around Santhepet, Shivarampet and Dufferin Clock Tower, during which fines were imposed on a few shopkeepers for conducting business without wearing face masks.

Following complaints from the public, the team then visited D.D. Enterprises at Santhepet and on examining the packed fried snacks such as kodubale, chakkuli and other such items, the MCC officials found that the fried snacks had expired, according to manufacture and expiry date printed on the packets.

The MCC officials, who told the shopkeeper that consumption of such expired food items would lead to health issues, imposed a fine of Rs. 2,000 on the shopkeeper and seized the food items that had expired. The officials also collected a total of Rs. 800 from those found not wearing masks and created awareness on the importance of wearing face mask and maintaining social distancing.