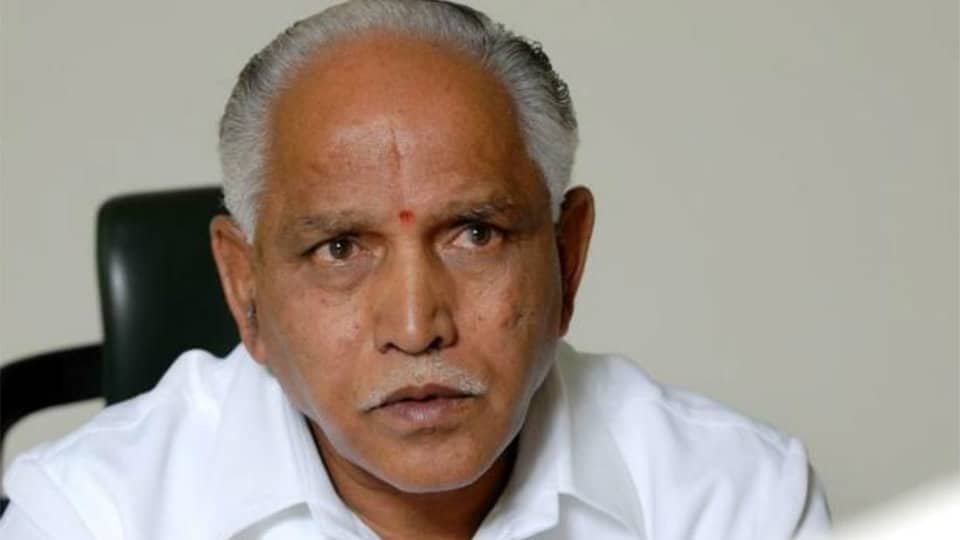 Bengaluru: Two days after accusing Karnataka Chief Minister Siddharamaiah and State Energy Minister D.K. Shivakumar of corruption in the course of payment of penalty of Rs. 447 crore to the Central government for re-allotment of a coal block allotted to a Kolkata-based public-private firm, BJP State President B.S. Yeddyurappa (BSY) yesterday charged Siddharamaiah with heading a “commission government” and demanding 20% to 25% cuts for sanctioning and clearing infrastructure projects.

Speaking after releasing the logo and the route map of BJP’s Nava Karnataka Nirmana Parivarthan Yatra in Bengaluru, Yeddyurappa charged that no project is cleared by the government in the State unless the investors agree to pay a substantial amount of commission.

“Ever since we exposed the coal block scam, Siddharamaiah and Shivakumar have been telling lies to escape. We stick to our stand that the Supreme Court levied a penalty of Rs. 417 crore on the private company. But the duo went out of their way and made the government pay the fine and interest on it,” Yeddyurappa charged.

The BJP leader said the party will expose the misdeeds of the government during the 75-day yatra, which will criss-cross all the 224 Assembly constituencies in the State commencing  from Nov. 2.

He said it will be one of the biggest yatras in the history of the country and conclude on Jan.28 in Bengaluru with Prime Minister Narendra Modi addressing a mammoth convention. Party Central leaders and Chief Ministers of BJP-ruled States will address public conventions at District Headquarters, he said.

Providing details of the yatra, BJP State General Secretary Shobha Karandlaje said that as many as three lakh workers, including one lakh who will arrive on bikes, will participate at the launch of the yatra at Bangalore International Exhibition Centre (BIEC). Party National President Amit Shah will launch the yatra.

There will be three public meetings each day in different Assembly segments — one each at 11 am, 3 pm and 6 pm. A specially-designed “ratha” will be the lead vehicle of the yatra. Yeddyurappa will address from the ratha at multiple locations along the yatra route. The yatra will take a break after every three days.

Union Planning and Programme Implementation Minister D.V. Sadananda Gowda said that the party will reveal its plans and programmes for the people, if voted to power, during the yatra.