Home » Columns » Some more Music and some Mystery too ! 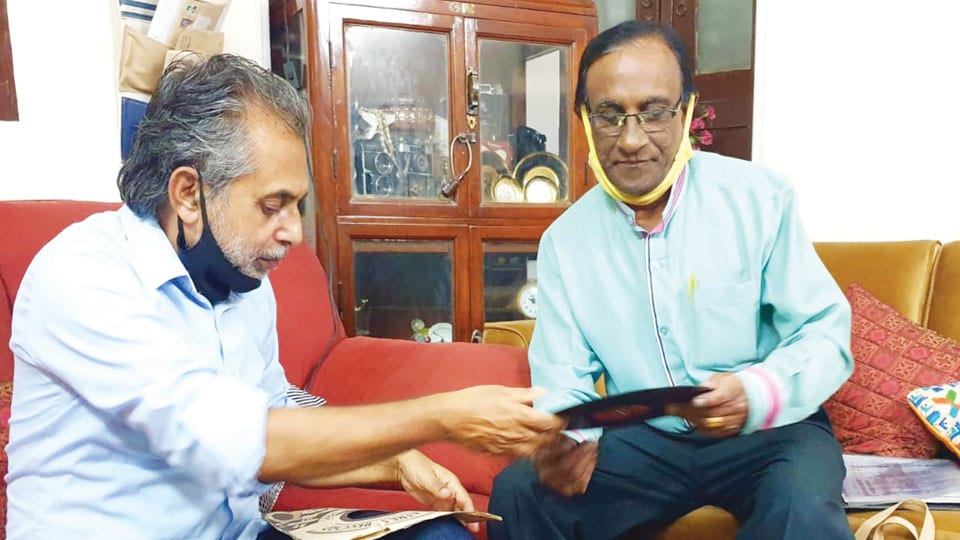 Some more Music and some Mystery too !

In my last article I said that I would be writing about my meeting with a regular reader of my column, D. Madanraj Urs who wrote to me saying that he wanted to gift me some vintage gramophone records, after reading about my interest in the music of the yesteryears.

We had fixed up an appointment to meet each other and at the appointed hour he came home with his close friend Mubeen Ahmed, a civil contractor and builder, who said that he knew both my father and father-in-law over many years. But although I had heard of him, I was seeing him for the first time.

Madanraj told me that his late father D. Devaraje Urs, who was very close to the Mysore royal family, used to have two radio shops in Mysuru. One under the name of Gayathri Radio Corporation on Vani Vilasa Road and the other under the name of Sri Sathyapremakumari Devi Radio Corporation in the building facing the Dufferin Clock Tower, now popularly known to all only as the ‘Chikka Gadiyara.’ Because of their owner’s high regard for our royalty, both were very obviously named after two prominent ladies of the royal family — the first daughter and the first wife respectively, of H.H. Jayachamarajendra Wadiyar, the last real Maharaja of Mysore.

It seems they were the official dealers for some very famous brands of radios like the German Jhankar and the two famous British brands, Pilot and Murphy. Later Murphy went on to become the market leader in Indian radios with its mascot the chubby Murphy Baby, who adorned every one of its hoardings, ads and calendars, year after year, for many years!

While we all grew up and became old, the Murphy baby never grew up! And, as is natural, if you are in doubt about who this tiny-tot was and how he looks now, I’ll dispel your doubts next week!

In addition to radios, they also used to sell gramophone records and record players. The more than two dozen records Madanraj brought were all old classics. Among them were some Kannada, Hindi and Tamil rarities which I did not have. Before coming to meet me, he had very meticulously written down their details on a sheet of paper making it easy for me to know their contents!

In addition to these, he also gave me a few old issues of the once famous Life magazine which ceased publication in the year 2000 after being at the top of news magazines for over a hundred and seventeen years starting from the year 1883! This was an iconic magazine that started off as a weekly and then became a monthly.

The icing on the cake for me was that among the issues he gave me was a special issue that covered the history and evolution of photography and another that covered the twenty-fifth anniversary of the assassination of the both famous and infamous American President, John F. Kennedy.

Madanraj who seemed to have a flair for meticulously preserving relics and records from the bygone era had brought some photographs of his late father with the late Maharani Gayathri Devi of Jaipur who passed away in the year 2009 at the age of ninety. They were taken in the year 1964 when he went there to campaign for her when she was contesting an election as a candidate of the Swaraj Party. Madanraj had brought carefully preserved photographs and cuttings from newspapers of that time which showed his father with the late Maharani. He was kind enough to let me photograph them although I felt very nervous to handle them for fear of damaging them!

And, when I told him that my wife too was a great fan of the Rajamata and showed him her large collection of coffee-table books about her and the city of Jaipur, he was very delighted and surprised too! Because of his father’s closeness to the Mysore royals, Madanraj was a storehouse of very interesting anecdotes about them and their life which made my tete-a-tete with him a great pleasure.

But a story that he told me, supported by the documentary evidence that he showed me, is something that is worth mentioning here. You may all recall that way back in the year 2005 there was sensational theft of fifty lakh rupees in five hundred rupees denomination from the ultra-high security vault of the BRBNMPL currency printing unit in our city.

The theft stunned the security setup of the press and also the investigating authorities and could not be solved for a full year despite the CBI being entrusted with the investigation. Advertisements were issued in all newspapers listing the numbers of the stolen notes with a request to the public to report immediately if they came across any of them during their day-to-day transactions. That is when Madanraj donned the overcoat of Sherlock Holmes and got into the act and did something none of us would have done.

He painstakingly started checking the serial number of every five hundred rupee note that passed through his hands. And, lo and behold, one day when he withdrew a sum of ninety-eight thousand rupees from his SBI bank account to pay for the construction expenses of the new house he was building, he found one note from among the stolen lot!

Wasting no time, he rushed to MLA S.A. Ramdas and handed it over to him. This photograph of him handing over the note appeared in SOM too and overnight he became a hero for having provided the first clue to a completely clueless investigation! And, that is when his troubles began.

Very soon the CBI officials came calling to his house, armed with very strong suspicion that he could be one of the culprits who was in possession of the stolen notes. All his pleas that he was only an innocent citizen who had responded to the call of the Government and had tried to help in the investigation, fell on deaf ears. How the agencies could disregard the fact that no thief would ever think of submitting a piece of the evidence of a crime he had himself committed is what makes their approach surprising.

After many sessions of interrogation Madanraj was served a summons and asked to present himself at the CBI office in Kochi for further questioning which left him in great anxiety and distress. But thankfully, just one day before he was to leave for Kochi, one of the real culprits, a security guard at the note printing press, was apprehended. As he spilled the beans about the crime and his other accomplices, it became clear to the CBI that Madanraj was as innocent as he claimed and he was thus taken off their scanner, to his great relief!

But he had to appear in many of the subsequent hearings of the case as a prosecution witness which he did. This time, as an honourable citizen once again!