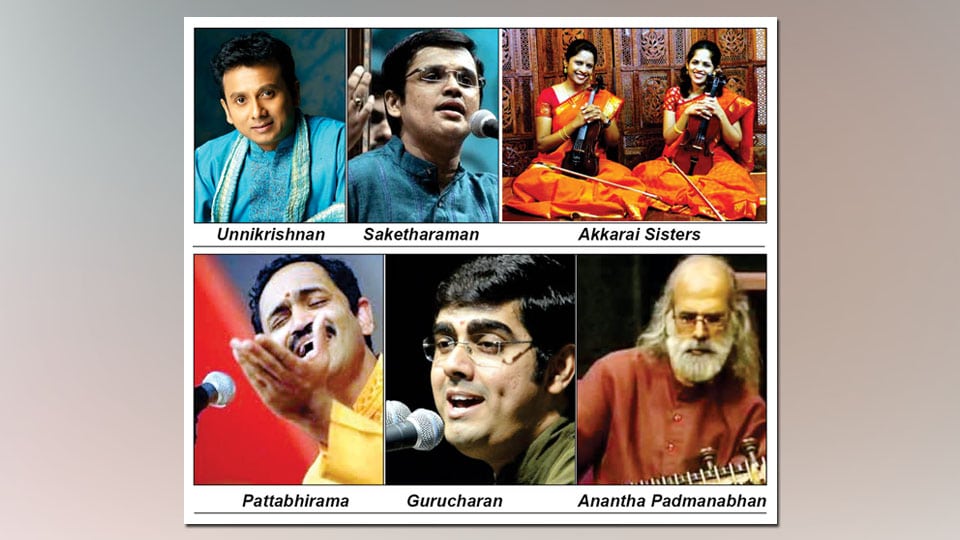 As part of its 127th year Sri Hevilambhi Samvatsara, Sri Ramothsava has been organised by Sri Ramabhyudaya Sabha Public Charitable Trust, Vinoba Road, Mysuru in association with Department of Kannada and Culture at Srimathi Alammanavara Chatra, Kunchitigara Sangha, Srirampet, from April 5 to 20.

J. Ravi Kumar, Mayor, will be the chief guest. Rtn. K.V. Murthy, Industrialist and  Art Patron,  will be the special invitee.

April 8: Classical Music – Vid. Pattabhirama Pandit to be accompanied by T.K. V. Ramanujacharyalu on violin and B. Harikumar on  mridanga.

April 9: Classical Music – Vid. Sikkil Gurucharan to be accompanied by Mattur Srinidhi on violin, Patri Satish Kumar on mridanga and Guruprasanna on kanjira.

April 14: Violin Duet – Vid. T.K. V. Ramanujacharyalu and Vidu. Charulatha Ramanujam  to be accompanied by Tumakuru B. Ravishankar on mridanga and S. Manjunath on ghata.

April 15: Ramayana Darshanam dance-drama will be presented by Dr. Vasundara Doraswamy and troupe.

Ramayana Discourse will be held at Rama Mandira from April 5 to 15 from 5 pm to 6 pm. K. Ramachandra, Retired Engineer, will deliver the discourse.

April. 16:  Sri Rama Pattabhisheka, Abhisheka and Archane will be held at 9.30 am. Gamaka  Vaachana by K. Ramachandra, Vyakhyana by Vasantha Venkatesh, Mahamangalarathi  at 12. 30 pm and distribution of prasadam at 1 pm at Udupi Srikrishna Mandira, Narayana Shastri Road, Mysuru.

April 17:  Vid. Ramaprasanna and Vid. Rahul Raman and troupe will be presenting veena recital at 6.30 pm at Rama Mandira.

April 18: Hanumanthotsava will be held at 6. 30 pm and the procession will be taken out through the thoroughfares of the main routes. Vid. Parthasarathy and troupe will present Nadaswara; mahamangalarathi at 8 pm followed by the distribution of prasadam.

April 30: Sri Shankara Jayanti — Abhisheka will be performed to Sri Shankarabhagavatpada, archanae and procession will be taken out through the thoroughfares of the main routes followed by mahamangalarathi and distribution of prasadam.  For details, contact Secretary N.S. Ramasubbu on Ph: 0821- 2422448.