Home » News » Srirangapatna youth to participate in US Science Conference 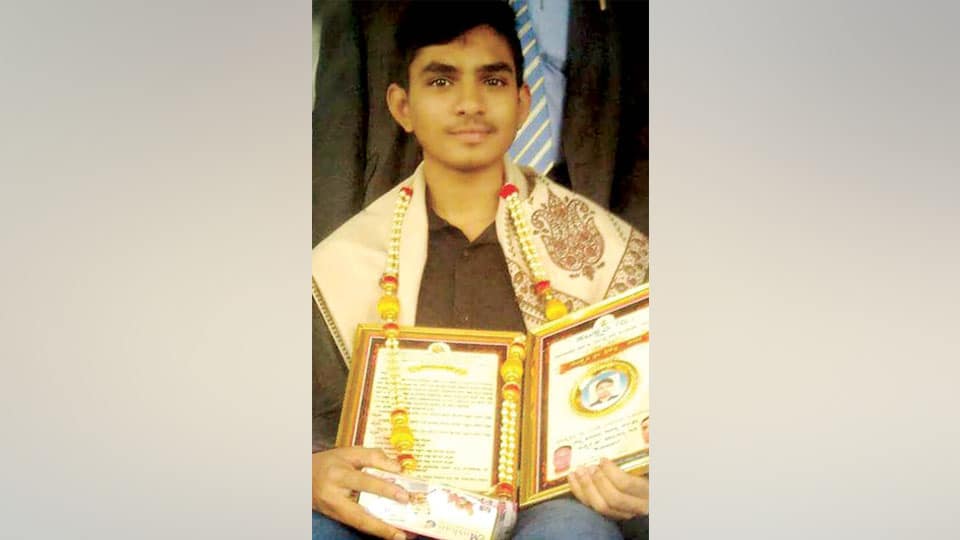 Srirangapatna youth to participate in US Science Conference

Mysuru: One of the brightest science talents, C.S. Mohammad Suhail, who hails from Srirangapatna, has been selected to participate in the International Science Conference to be held in United   States America.

A second PUC student of St. Aloysius College, Manguluru, Suhail is the son of Srirangapatna’s littérateur couple Anarkali Salim Chenya and Dr. Parveen Salim. What is very noteworthy is he has achieved this feat doing research under the guidance of his mother.

He is going to represent the country at the International Science Conference to be held in Pittsburgh in USA in February 2018.

Suhail has conducted several experiments including generating power through human walk and sound. In the contest held in Delhi, he developed a unique strip along with Swasthik Padma, his classmate to diagnose protein-energy malnutrition (PeM) titled, “An economical early detecting and dosage monitoring tool for PEM.”

Apart from detecting malnutrition in children below six years without drawing blood for tests, this strip also helps to estimate the approximate quantity of supplementation required to overcome the deficiency.

Suhail has represented Karnataka through Karnataka Rajya Vijnana Parishat in the Indian Science Congress held at Jammu and Kashmir, Maharashtra and Andhra Pradesh. He has also presented scientific research papers at the National Science Conferences in Madhya Pradesh, Baramati and Hubballi.

He has won several awards including District Child Scientist, District Youth Scientist and Rotary Science Award. He has participated in the Chandana Doordarshan State-level Quiz contest and bagged the first prize.

Suhail hailed: Union Minister for Science and Technology Dr. Harsh Vardhan, in a twitter message, has hailed the achievement of Mohammad Suhail and congratulated him.

Even late President A.P.J. Abdul Kalam and  Nobel Laureate Kailash Satyarthi have lauded his achievement, which is commendable.