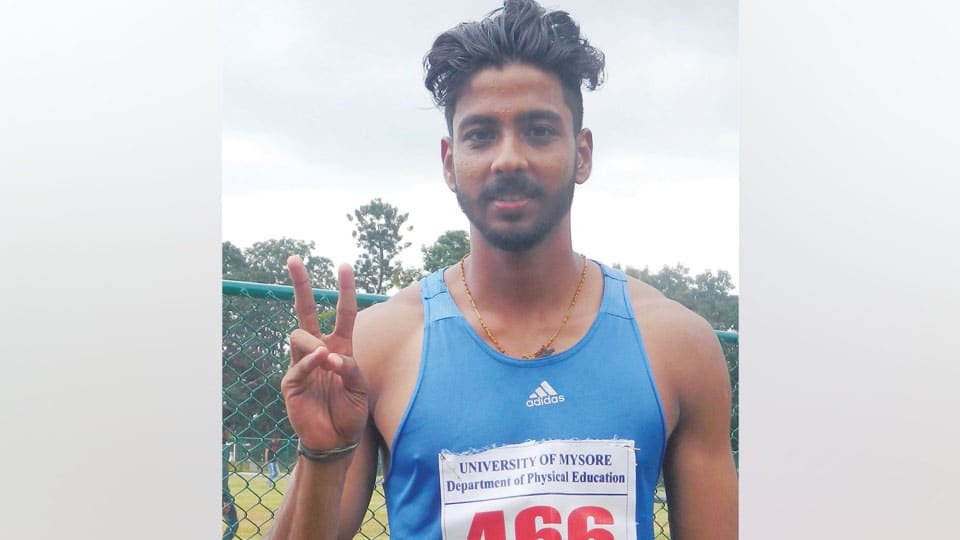 Athletics is very popular in the sporting scene. Our city’s athlete Boby Sabu created a flutter by erasing the 54-year old Triple Jump record in the men’s section, erasing the old record of 14.95m set by M.A.Cariyappa of Maharaja’s College, Mysuru, in 1963-64, in the 89th University of Mysore Inter-Collegiate Athletic Championships (2017-18) by leaping to a record distance of 15.22m. He is our ‘Star This Week.’

The 19-year-old Boby Sabu, is a 1st year BA Economics student at Basudeva Somani FGC, Mysuru, who has been doing well in the Junior level in the National Athletic Meets. A former Kerala State junior athlete, Boby is presently based in Mysuru. Taking part in the 89th University of Mysore Inter-Collegiate Athletic Meet 2017-18 at the University Oval Grounds, he shattered the 54-year-old Triple Jump record leaping to a record distance of 15.22m and clinched the gold.

Boby, born in Alappuzha in Kerala, is the son of Sabu and Beena. Inspired by his sister Sanitha Sabu, who is a Kerala State athlete in the women’s section (Hurdles & 100m), Boby took up to athletics while he was young.

Boby took part in the High School meets representing ABV HS, Alappuzha in the 400m, Long Jump & Triple Jump events and performed well. Later he joined LNCPE, Trivandrum and was trained under the guidance of athletic coach M.A. George. He represented Kerala State junior team in the National Championships and won a silver medal with a distance of 15.40m in the Triple Jump event, which is his career best.

Encouraged by Basudeva Somani FGC and its Physical Director Sadashiva Bhat, Boby intends to represent the University of Mysore and perform well in the All India Inter-University level. He aims to work hard and represent the country in the International level.