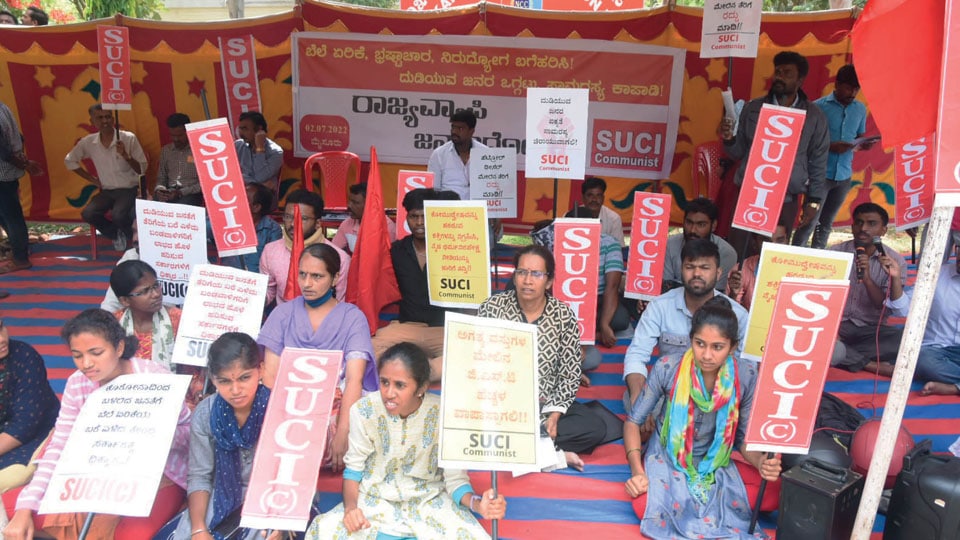 Mysore/Mysuru: Condemning the frequent increase in prices of essential commodities including diesel, petrol and LPG, members of Socialist Unity Centre of India (Communist) (SUCI-C) staged a protest in front of the Deputy Commissioners Office in city yesterday.

The inefficiency in administration of Centre and State Governments for the past few years have resulted in escalation of prices. People’s representatives have involved themselves in corruption. The prices of basic commodities like LPG, cooking oil, ration, medicines etc. have increased resulting in inconvenience to the general public especially the economically weaker section who can’t even afford a meal for a day, the protestors alleged.

“The GST has also increased for the ration items. The job opportunities are declining. There are vacant posts in various Government sectors, but the Government is not recruiting people fairly. Even though they start the recruitment process, there is corruption all over and recruit those who have high influence and connections,” the protestors said.

“There is a 40 percent commission for contracts to any Government works. The tax we pay is now in the hands of political leaders who end up misusing our hard earned money,” the protestors said and expressed their outrage stating that the Government must facilitate the public by providing essential commodities through Ration Cards and must consider corruption as a serious issue and take necessary actions.