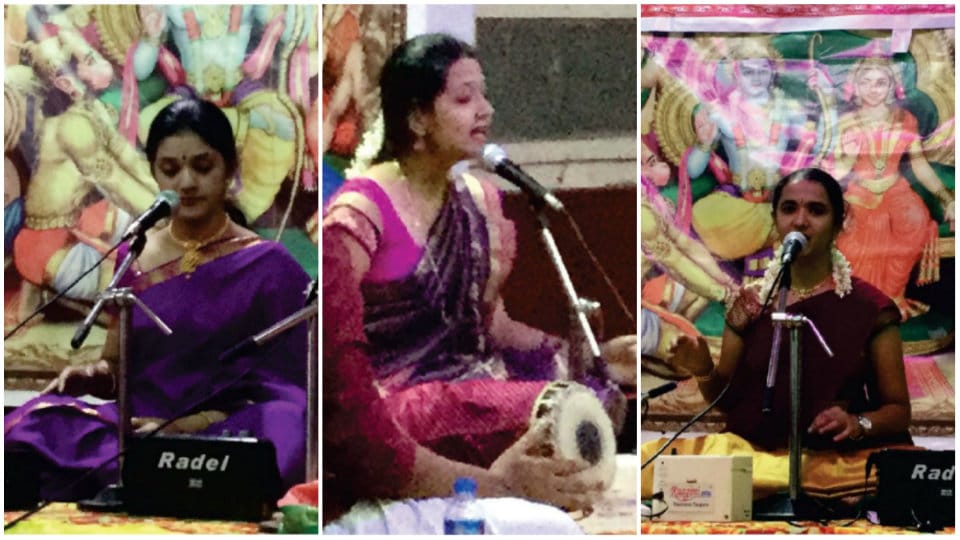 Surabhi Ganakala Mandira, Charitable Trust, Mysuru, had organised a two-day Yuva Pratibhotsava at Jayanagar Rama Mandira in city recently in order to provide a platform for young musicians, who had won the ‘Naada Surabhi’ award during the State-level Classical Music Contest held by ‘Surabhi.’

All the four singers who performed on this occasion, showed extraordinary confidence along with energy and enthusiasm all along their concert of an hour-and-a-half each. It was delightful to watch them handle even the most difficult areas like the Neraval and Graha Bheda with utmost ease. This was possible, probably, because of the extensive exposure of the youngsters to a wide range of music and plenty of opportunities to perform. Of course, good Pathantara by the Gurus, hardwork and dedication of the disciples and the increased IQ level of the present generation are the other reasons to achieve such excellence.

The first concert was by Vid. Y.G. Srilatha from Bengaluru, who was awarded ‘Naada Surabhi’ in 2012. Well-grooved under the veteran Vid. Neela Ramagopal, Srilatha confidently presented a few rare compositions like the Varna in Nalinakanthi,  kritis in Amrithavahini and Jayanthasena. The main raga was Panthuvarali which was rendered neatly in detail, followed by the kriti, ‘Shankari ninne’ (Vasudevacharya) in Mishra chapu tala, along with Neraval and Kalpanaswaras. Perfect alignment of pitch and control over laya, easy flow of gamakas were the highlights of Srilatha’s concert.

The second concert of that day was by Vid. H. Usha from Udupi, who was equally confident as Srilatha. After singing compositions like Paalisamma muddu sharade (Sriranjani) and Chintayami (Hindola), she took up Thodi as the main raga wherein she exhibited her talent to do Graha Bheda. After giving a touch of Mohana, her come back to the main raga was so natural and elegant that it looked very easy.

These two concerts were ably accompanied by two youngsters, Shruthi on violin and Vid. Pavan Madhav Maasur on mridanga.

The next day, that is, on June 25, Vid. Madhuri Koushik and Vid. Lavanya (both from Bengaluru) gave excellent concerts, like the previous day. Madhuri began the concert with the kriti, ‘Evarikai’ ( Devamanohari — Mishra chapu), and continued with a Vivadi raga, Chandrajyothi and presented the well-known kriti, ‘Baagaayanayya.’ Shankarabharana was the raga chosen by her for detailed alapana and the kriti was ‘Sahajaguna Rama’ of Muththayya Bhagavathar with many Sangathis both in Pallavi and Anupallavi. After a good Neraval at ‘Parama Bhaktudaina,’ she decorated it with Kalpanaswaras in which she did Graha Bheda to bring out a tinge of Revathi. The Tamil composition in Shuddha Saveri and the final Meera-Bhajan in Shuddha Saarang were very pleasing.

The last concert was by Vid. Lavanya, who is the first recipient of the title, ‘Naada Surabhi’ in 2011. Being a disciple of the famous musician of Karnataka, Dr. T.S.Satyavathi, Lavanya proved her prowess in all aspects of music. Blessed with a melodious voice, Lavanya has cultured it properly which helps her to present the compositions in a very appealing manner. She started the recital with a Varna in Abhogi in two speeds and sang the raaga, Gambhiranata very neatly before the krithi, ‘Vanajaaksha’ by Mysore Sadashiva Rao. The elaborate delineation of raaga, Varaali, with a professional touch was brilliant. The slow tempo she chose to sing ‘Eti Janma Midiha’ (Tyagaraja ) in Mishra Chapu was apt to bring out the bhava of the small but tough krithi. She concluded the concert with a very melodious rendition of the popular number, ‘Bhavayami Gopala Baalam’ in Yaman. The accompaniment for these two concerts was provided by the smooth bowing of violin by Vid. Keshav and soft beats on mridanga by Vid. Srinidhi.

Dr. Sukanya Prabhakar said that she was very happy to organise this programme as the young artistes proved that the future of Karnatak Classical Music is not only safe but very bright in their hands