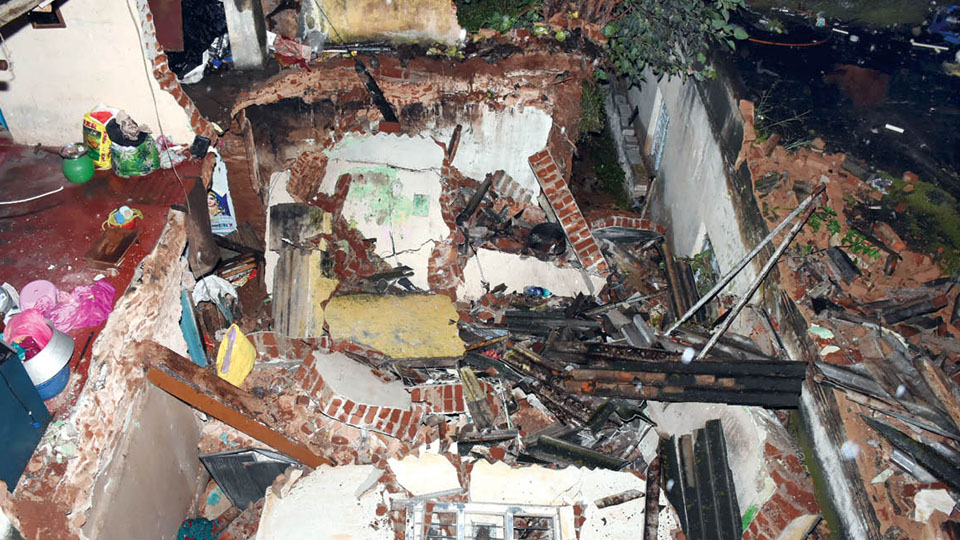 Dilapidated structures posing threat to public life to be listed

Mysore/Mysuru: Taking a cue from the Bruhat Bengaluru Mahanagara Palike (BBMP) that has ordered a fresh survey of all dilapidated buildings, the Mysuru City Corporation (MCC) has begun a survey of weak commercial and residential buildings within city limits and under its nine Zones.

While a series of buildings have collapsed in Bengaluru in the recent past raising questions of safety of residents, what has forced the MCC to act now is the collapse of a house at Ittigegud (Indiranagar) on the evening of Oct. 11. Following heavy rains, a portion of the house on Periyathambi Road collapsed trapping three elderly women who were rescued later.

Soon after the incident, MCC Commissioner Lakshmikantha Reddy called a meeting of all Zonal Assistant Commissioners and Assistant Executive

Engineers and instructed them to prepare a list of dilapidated houses and buildings and submit a list so that a call can be taken on the fate of such structures.

Speaking to Star of Mysore this morning, the Commissioner said that the survey has already begun in all zones and lists are being prepared. He said that the engineers concerned in each Zone will visit the sites of dilapidated buildings, review and submit accurate information on the same.

“Identification of both commercial and residential buildings which are in poor condition is a continuous process. Officials in the Zonal level have been asked to take action in this regard. We don’t want lives to be harmed,” Lakshmikantha Reddy added.

Once the buildings are identified, action will be taken at the Zonal level — either demolish, strengthen or vacate the occupants. “All the properties that will come under MCC, Mysuru Urban Development Authority (MUDA) and private properties will be classified accordingly. Once structural engineers inspect the buildings, a decision would be taken on them. If it is a private property, the residents of such buildings will be asked to repair,” he added.

READ ALSO  No end in sight on fate of Devaraja Market

Interestingly, the MCC will not bear the cost of rebuilding or strengthening such buildings.

The cost will be borne by the MCC only if it belongs to the Corporation. Other building owners too will be identified and will be informed accordingly and there is no question of MCC giving compensation, Lakshmikantha Reddy explained.

It may be mentioned here that when Gurudatta Hegde was the MCC Commissioner from 2019 to early this year, a survey was commissioned to identify heritage as well as dilapidated buildings. At that time 25 buildings in the city were classified as dangerous and 50 of them were classified as unfit for residential purposes and needed to be demolished immediately.

Over 600 buildings were identified as more than 100 years old. However, the issue was put on the backburner later and even Gurudatta Hegde was transferred from the MCC.