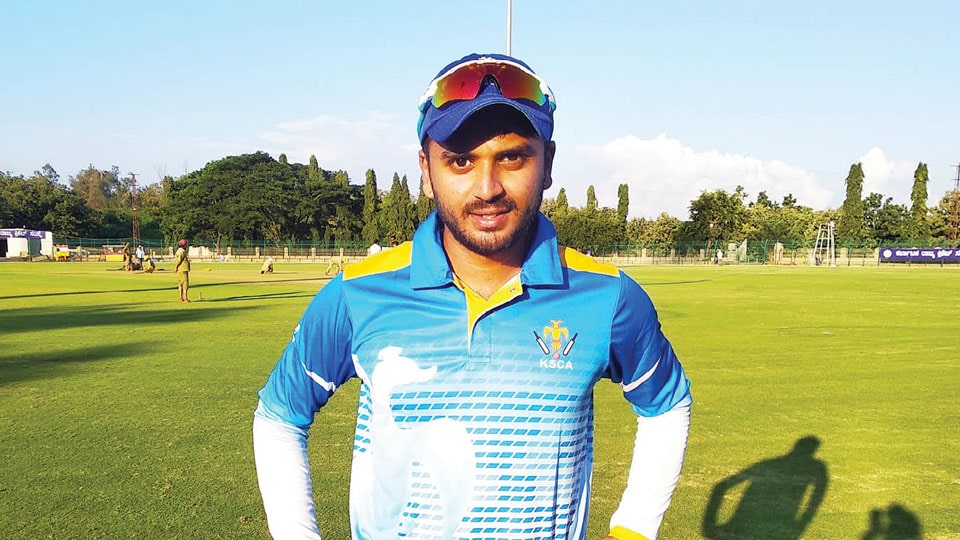 With a century on debut for Karnataka in Ranji Trophy against Vidarbha (103, 161b, 20×4), in November 2018, 23-year-old B.R. Sharath, a dashing wicket-keeper-batsman, has progressed well and with his string of good performances in the U-23 group for Karnataka, he earned selection to represent India U-23 team for the ODI series against Bangladesh during September 2019 and performed well by scoring 42, 55 and 35 respectively for India.

Coming from a cricketing background, Sharath entered the game at an early age and represented Karnataka in the U-14, U-16, U-19, U-23 and Ranji Trophy. He won the Best Batsman Award in 2016 given by BCCI for his outstanding performance in the Vinoo Mankad and Cooch Behar Trophy.

Sharath’s good performance was spotted by Karnataka State Cricket Association (KSCA) and he was sent to train at the Durham County Cricket Club, England for six weeks in 2015 where he gained valuable experience and exposure.

He scored a 50 in first innings and in second innings scored a 55-ball 100 against Jharkhand for Karnataka in the U-23 tournament and this innings gave him a break and earned him a selection to the Karnataka Ranji team. He has so far played six Ranji trophy matches for Karnataka and in his 10 innings has scored 182 runs with 103 against Vidarbha on debut as his highest. He has held 23 catches and has got 4 stumpings to his credit.

Sharath is presently representing Karnataka in the ongoing BCCI U-23 one-day tournament in Mysuru and has scores of 67 and 12 against Madhya Pradesh and Maharashtra respectively.

Star of Mysore caught up with him. Excerpts:

Star of Mysore (SOM): Tell us about your early days and your progress to this level.

B.R. Sharath: Cricket was in my blood as my father and father’s elder brother all played good cricket. I accompanied my father to Basavanagudi Cricket Academy and entered the game instantly at the age of six. I went on to represent the State in the U-14, U-16, U-19, U-23, Ranji trophy, Vijay Hazare Trophy 2018-19 and Mushtaq Ali trophy.

I was the highest run-getter for Karnataka in U-16 and was selected to the National Cricket Academy. I played for south zone U-19 for two years and in the U-23 representing Karnataka last year, I got a good break when I played well and scored a 50 and 100 in 55-balls against Jharkhand. This performance earned me selection to the Ranji Trophy and in my debut match against Vidarbha at Nagpur in 2018 I was confident and scored 103.

I added 160-runs with D. Nischal (113) when Karnataka at one stage were 149 for five and the team recovered to post a total of 378. I have gained valuable experience. I performed well in U-23 level and I earned selection to represent India U-23 team in the ODI series against Bangladesh in September 2019.

SOM: How was the experience representing India and how did your fare?

B.R. Sharath: Representing India and wearing Indian Blue is a dream come true for every cricketer and I was also was proud. Contributing towards winning made be happier. I had a decent performance in the five-match ODI series with scores of 42, 55, and 35.

SOM: Did playing for India help you hone your skills?

B.R. Sharath: Representing India we need to be professional and must know our role and perform to the team’s requirement. It’s a different ball game in the international level and the experience has enabled me to be more committed and professional and positive in my approach.

SOM: Your preparation for the on-going U-23 one-day BCCI matches.

B.R. Sharath: This is the beginning of the season and I feel I am in good nick and I intend to work hard and contribute both with the willow and also behind the stumps.

SOM: What about the forthcoming Ranji trophy season?

B.R. Sharath: Ranji season is very important for me. I have gained valuable exposure since my first season last year and am more mature now and aim to be more consistent. As it is a longer version of the game, I intend to adapt to the same and perform well in the 2019-20 season.