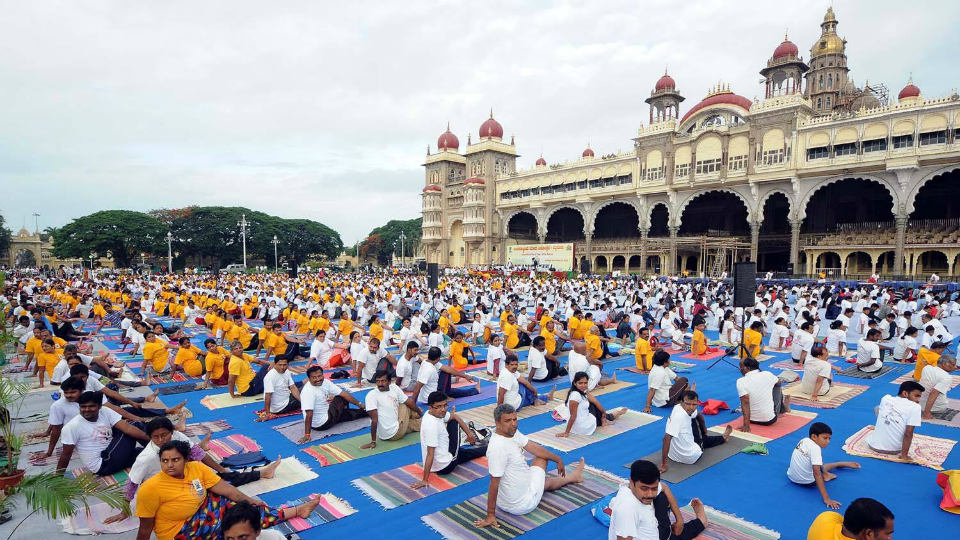 In a two-way movement of sorts, scientific knowledge as well as technologies in the form of ubiquitous devices and machinery has witnessed West-to-East direction while yoga, ayurveda and philosophies espoused by India’s luminaries of a distant past have witnessed East-to-West direction, India being accorded a prominent position in the East. In the august company of the aforementioned stock of knowledge and material artefacts of the West are jeans, pizza, jogging, attire of outrageous designs and so on. The past few days, reaching June 21 being observed as the Annual International Yoga Day for the fourth time in a large number of countries across the world have hogged limelight with the media reporting events related to the occasion supplemented by graphics, participation of VIPs of all hues in the company of yoga enthusiasts in their hundreds and thousands, only heightening the attention bestowed upon yoga and celebration of the special day. Mysuru earning a Guinness World Record has proved to be an icing on the cake as it were.

Prime Minister Narendra Modi, appearing in public performing asanas, has urged people to embrace yoga with the request to share the joys of yoga with others by teaching yoga, particularly to today’s youth, ostensibly to create a healthier planet. India’s Vice-President Venkaiah Naidu’s prescription takes yoga on a wider canvas with his call for yoga to become a people’s movement.

The two gifts that the land’s ancient spiritual legends have bequeathed to generations after their times over centuries, namely Ayurveda (Knowledge of life) and Yoga are being bestowed attention in diverse ways, extent and scale. Practitioners of ayurveda in the land don’t seem to be visible in society to a significant extent unlike the yoga enthusiasts including yoga gurus of all hues. Also, the number of colleges offering ayurveda courses and the graduates coming out of them pale into nothingness compared to the number of yoga practitioners and centres teaching the ancient discipline. Even the governmental inputs into promoting ayurveda smacks of mere tokenism.

Reports of inappropriate ways of teaching yoga by those learning the art in India, particularly Mysuru, resulting in yoga-induced injuries should wake up the players in the expanding world of yoga gurus. The news that the Union Government has struck deals with 10 countries to carry out research aimed at promoting ayurveda and yoga is bound to be received with mixed feeling. Let the initiative be blessed by Sage Pathanjali, the Father of Yoga and Charaka-Sushrutha, the Pioneers of Ayurveda.