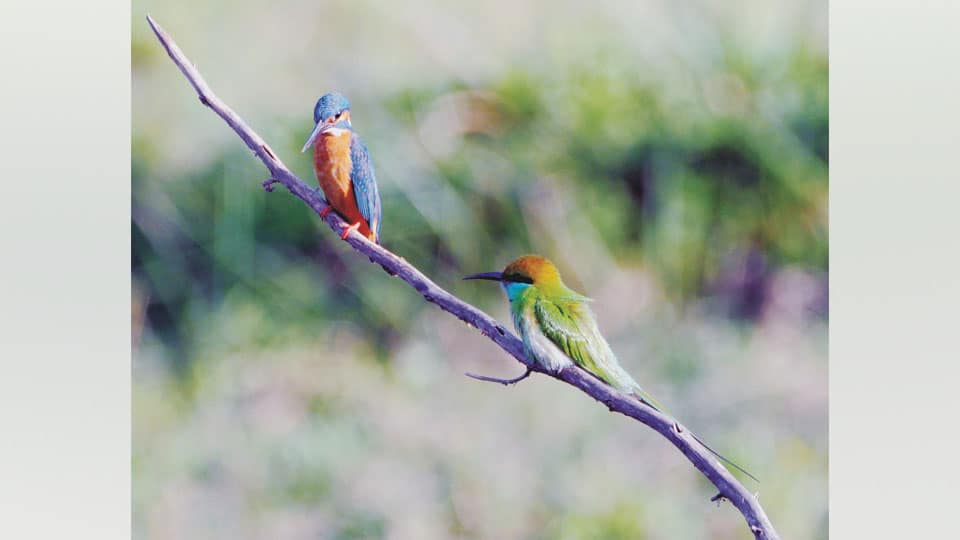 This interesting picture of ‘two birds on a perch’ — Small Blue Kingfisher – Alcedo atthis and Green Bee-eater – Merops — is a document captured by Star of Mysore photographer M.N. Lakshminarayana Yadav.

As an ethologist explains, the Small Blue Kingfisher, is a ‘Diving Kingfisher,’ it does not hover above the water-body to locate and hunt fish, it perches on branch on a pond or riverbank and locates fish. Once a target is set, it takes a plunge, diving into the water to catch the fish. Second, the Bee-eater is an Insectivore. It hunts Dragonflies, Bees & other flying insects that skim on the water-body.

Here both the birds have formed a ‘Hunting Alliance’ (different species of birds, many times form such alliances to mutually benefit, without competing with each other) and have taken a Common Perch overhanging either a pond or canal or some kind of water-body.

When the Kingfisher locates prey and dives after fish, it disturbs the Dragonflies and other insect forms that are skimming on the water. The Green Bee-eater goes chasing the disturbed insects and prey on it. They again occupy the same perch taking positions. This they repeat until their can call it a day, and they continue this behaviour of hunting day after day. They mutually benefit, one by the Bee-eater keeping an alert eye on intruders, while the Kingfisher is concentrating and the in turn the Bee-eater getting the disturbed insects, an Alliance adopted by different species of animals to mutually benefit.