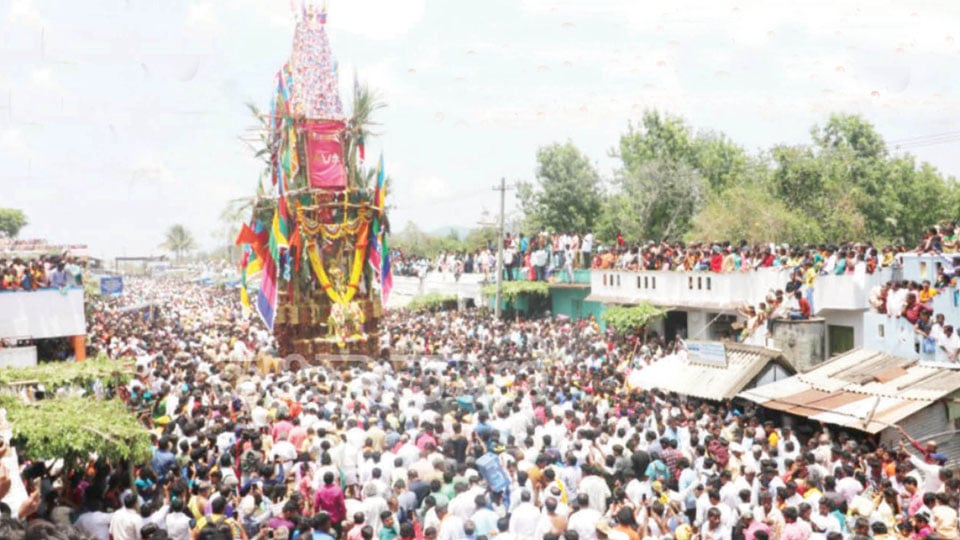 Yelandur: Thousands of devotees from Chamarajanagar and other districts, and also from neighbouring States of Kerala and Tamil Nadu, witnessed the ‘Maharathotsava’ of Sri Biligiriranganatha Swamy at B.R. Hills, also famous as Dakshina Tirupati, on Saturday.

The Maharathotsava, which could not be held during the past 5 years because of temple renovation works and Covid-19 pandemic, was celebrated with traditional gaiety and grandeur this year.  Thousands of devotees pulled the chariot of Sri Biligiriranganatha  Swamy with devotion and chanting ‘Govinda, Govinda.’

The holy rituals started early at 5 in the morning with Kalyanotsava. At the auspicious Karkataka Lagna Chandranavaamsha from 12.10 to 12.22, the Utsava Murty of Sri Biligiriranganatha Swamy along with those of Sridevi and Bhoodevi were hoisted at the chariot after which the Maharathotsava was flagged off.

Hundreds of Policemen ensured that the passage of Maharathotsava was smooth and hassle free. The Maharathotsava started westwards and reached its destination at 1.15 pm.

As the chariot moved on, devotees chanted ‘Govinda, Govinda.’ Farmers offered their produce to the presiding deity by throwing them at the chariot, women threw coins as their offerings while newly-wed couples offered havana and banana.

The road connecting Yelandur town and BR Hills is narrow and during Jatra days the road witnesses heavy movement of vehicles hampering smooth vehicular traffic. Keeping this in view, KSRTC officials suggested free bus services to devotees from Forest Department check post. But still, the huge number of devotees resulted in traffic jam of over a kilometre causing non-availability of free buses to devotees from Yelandur itself.