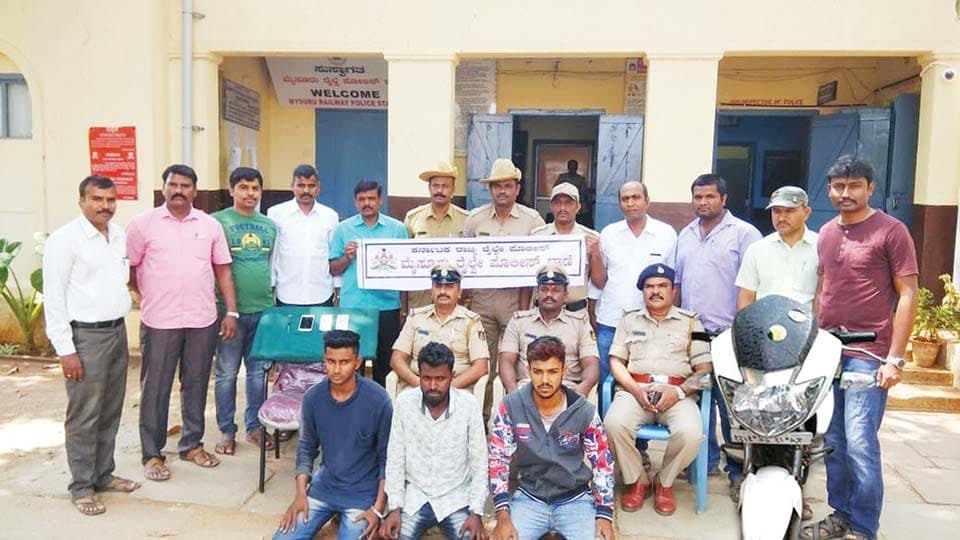 Three arrested for robbing person of cash, mobile phone after assaulting him

Mysuru: The Mysuru Railway Police have arrested three persons on charges of assaulting a person and robbing him of Rs.12,800 cash and a mobile phone worth about Rs.9,000 in the early hours of Mar.19. The miscreants were arrested on Mar.23 early morning  — within 48 hours of committing the crime. The arrested are H.E. Irfan Pasha of Holenarasipur and Salman Pasha and Shahid Pasha of Hassan.

On Mar.19 at about 2.15 am, the victim, identified as B.S. Sharanappa, a resident of Pragathi Nagar in Hassan, was walking on the railway track from the bus stand to go to his house near Hassan Railway Station, when a group of five youths aged about 25 years approached him and asked him to give money for cigarettes and match box. When Sharanappa refused to give money, one of the youths threw chilli powder on his (Sharanappa) eyes, hit him on the head with a beer bottle besides assaulting him with a knife on his hands. The youths then robbed him of Rs.12,800 cash and a mobile phone and fled from the spot.

Victim Sharanappa, after getting treatment at a hospital, lodged a complaint urging the Railway Police to take legal action against the unidentified miscreants following which, the Railway Police registered a case and took up the investigation.

Jayakumar, Sub-Inspector R. Jagadish and staff to nab the accused.

On Mar.23 at about 2 am, the Special Railway Police Team, found Irfan, Salman and Shahid, moving near the railway track in a suspicious manner and took them into custody for questioning. During interrogation, the three accused are said to have confessed of robbing an unidentified person of Rs.12,800 cash and his mobile phone after throwing chili powder to his eyes and assaulting him with knife.

Based on the information provided by the accused, the Police have recovered the cash and mobile phone besides seizing a TVS Apache bike and the knife used for the crime. The accused have been remanded to Judicial custody.