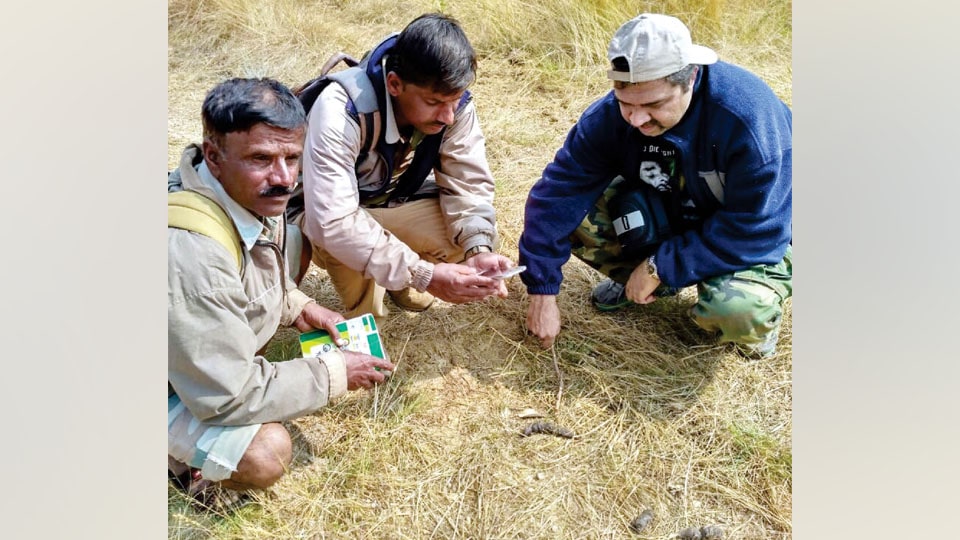 Gundlupet: The Forest officials of Bandipur Tiger Reserve along with volunteers began the Tiger Census-2018 this morning.

The census will be held till Jan. 13 at Bandipur and Nagarahole and from Jan. 22 to 27 (the date might extend till Feb. 3) in territorial forest divisions.

Nearly 60 volunteers and about 250 forest staff will conduct the Tiger Census at 111 beats in 12 Forest ranges coming under Bandipur Tiger Reserve.

Today, the volunteers and forest officials, who were divided into eight groups set off to conduct the census from 6 am to 9 am during which, two tigers were sighted at Kalkere and Gopalaswamy Hill Forest ranges. The census groups also found fresh dung of elephants and scat of tigers which was also noted down.

The census included study of forest animals, their natural habitat, conditions, number of herbivores and carnivores animals and their balance, their protection and the park’s condition. Along with this, the census will include whether there is any effect on domestic animals living in villages adjoining the forests.

Yesterday, training was provided to the volunteers and forest staff  by Bandipur Project Tiger Director Ambadi Maadhav, ACF Ravikumar, RFOs Srinivasanayaka, Naveen Kumar and Sunil Kumar, DRFOs Anil Kumar and Srinath Reddy and other forest officials, who were then divided into eight groups.

The groups stayed overnight at Anti-Poaching camps inside Bandipur Forest from where they set off for the census this morning. Due to the census being conducted from today at Bandipur, the forest officials have changed the timings of safaris in Bandipur. While the tiger census will take place from 6 am to 9 am, the safaris will start after the census ends. Usually, morning safaris are held between 6.30 am and 8.30 am. The timings have been changed to preserve the pugmarks or scats (poop) on the safari route in case any tiger passes through. These pugmarks and scats would be lost if safari vehicles move in the area.