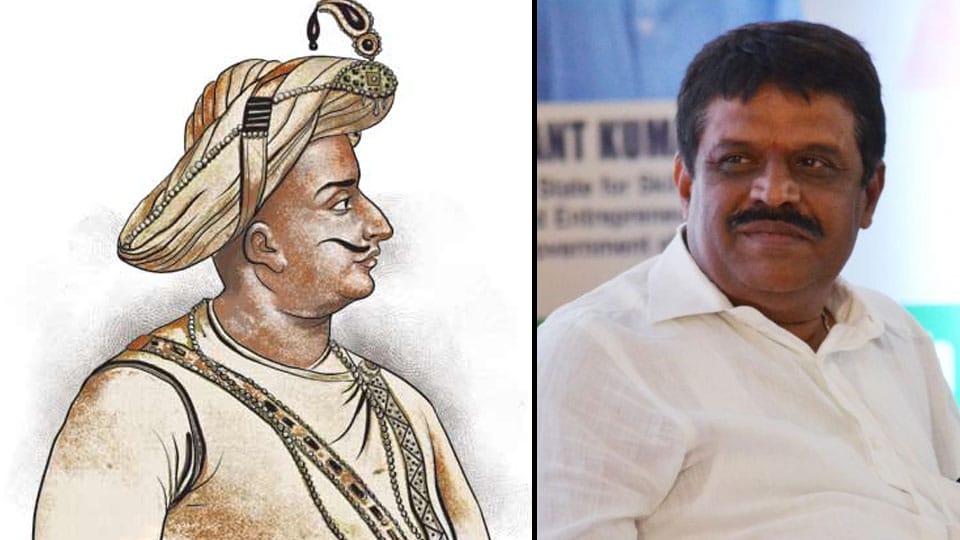 Bengaluru: A high-level meeting of historians, academicians and Madikeri BJP MLA M.P. Appachu Ranjan to decide on scrapping content related to Tipu Sultan from textbooks ended in a noisy altercation between Appachu Ranjan and historians. A three-hour marathon meeting at the Karnataka Text Book Society (KTBS) yesterday yielded no result with historians terming the BJP Legislator’s arguments as baseless.

The Committee, comprising officials and experts, has been asked to submit a report within a fortnight, but experts have sought a month. The meeting was convened after Appachu Ranjan wrote to the State Government demanding that the lessons on Tipu be removed, alleging that the ruler was a “fanatic.” At the meeting, Rajan made a presentation and urged the officials of the Karnataka Textbook Society and subject experts to remove the lessons.

An official of the Department of Public Instruction (DPI) said the Committee would scrutinise the documents presented by the MLA and then give their opinion. “We will forward the report by the members of the Committee to the Government, and the Government will take a call,” said an official.

Sources say the Committee told the MLA that it is a sensitive issue and needs to be dealt carefully. It said it needed time to study records before making a decision on whether to remove the lessons. Appachu Ranjan also claimed textbook lessons ignored atrocities perpetrated by Tipu, especially in Kodagu district from where he hails.

A top historian said, “The MLA only submitted a book translated from Persian to English by a London-based writer. It is primarily a collection of letters written by Tipu to various functionaries. Being historians, we cannot blindly buy his theory and need to verify facts and the context in which those letters were written.”

After the meeting, Ranjan told reporters, “We have clearly placed our demand that they should drop all content on Tipu Sultan from textbooks. We will not allow the glorification of Tipu Sultan in any textbooks.”

He said he was clear about his demand and that he has the necessary documents to authenticate the demand. “I have submitted all necessary documents and there is no question of backing out,” he maintained. The MLA revealed that he has been receiving threat calls following his petition to the Government. “After my petition, I have begun to get threat calls. But no threat can change my mind,” he added.