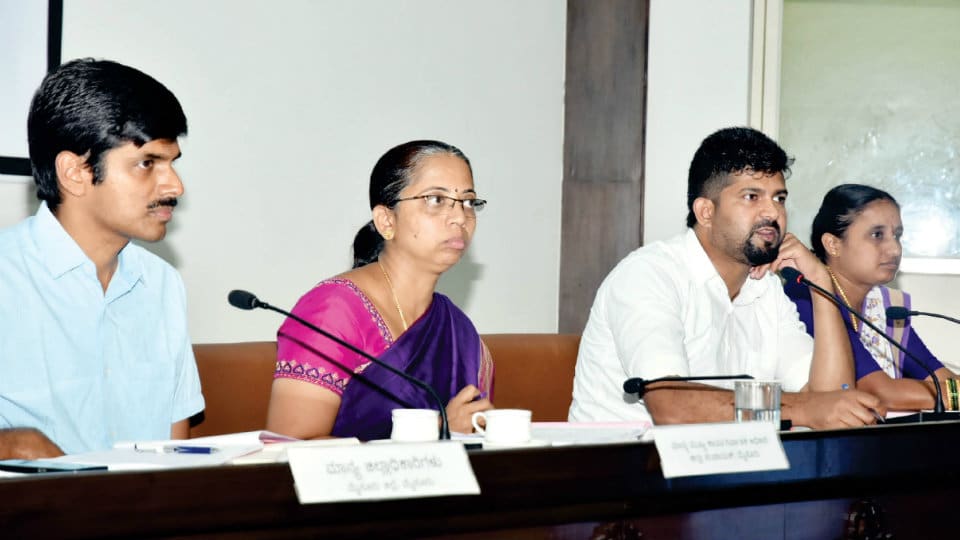 Mysuru: A Progress Review Meeting of the District Development Co-ordination and Monitoring Committee was held at the ZP Hall here this morning.

Presiding over the meeting, MP Pratap Simha, who is also the Chairman of the Committee, took strong objection to the absence of a number of officials who were supposed to attend the meeting without fail. A miffed  Simha directed Deputy Commissioner (DC) Abhiram G. Sankar to issue notice to all the absentee officials and seek a written explanation from them.

The MP directed the officials of Karnataka Urban Water Supply and Drainage Board (KUWS&DB), the executing agency to complete the Chamundi Hill Drinking Water Project within the time schedule, by clearing all hurdles. He instructed the Forest Department officials to provide immediate relief to the families of those killed in elephant attacks, to compensate the farmers for crop loss and to allocate space for building shelters to tribal communities in hamlets.

Turning to CESC Officials, the MP urged them to expedite underground cable laying works taken up in city. Pointing out that he has come to know that the CESC is paying Rs.1,600 per metre to the contract company, for underground cable laying, Simha wanted to know why such a high rate is being given, when the company has sub-let the contract for a very much lower rate. He asked the officials to have a re-look at the tender. Noting that there should be no homes without power connection in city and district, he asked the CESC officials to ensure that all homes have power connections.

READ ALSO  Piped cooking gas to be a reality in Mysuru too:  MP Pratap Simha

After receiving inputs on the progress regarding Social Forestry schemes, Pratap Simha wanted the authorities to plant flowering plants on the median of the Ring Road  as part of beautification plan.

Referring to Kukkarahalli Lake in city, the MP instructed the officials to build toilets along the walk-way and to ensure pure drinking water to the visitors.

Referring to the ambitious Ayushman Bharath Health Scheme of the Union Government, he directed the authorities to set up Health Card distribution centres at all the nine MCC Zonal Offices in city and 33 Hoblis in the district, on the lines of the newly opened Aadhaar Kendra.

Seeking details about the progress in the construction of JnNURM Houses, the MP  questioned Karnataka Slum Clearance Board officials on the delay in resolving Ekalavyanagar slum dwellers housing issue. He asked the officials to make a proper list of the beneficiaries and to allot houses only to genuine beneficiaries.