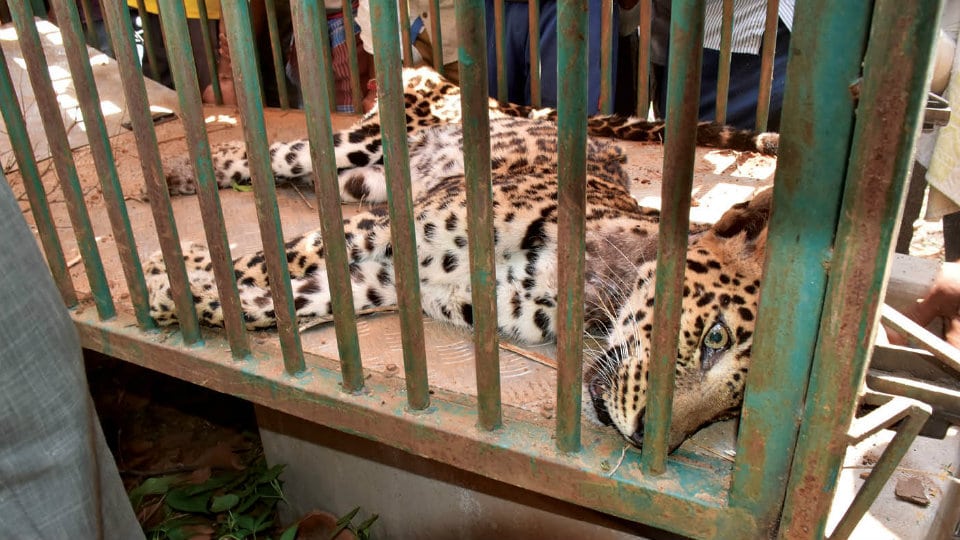 Mysuru:  The leopardess that was tranquillised by the Forest Department at Kyathanahalli village near Gaddige in H.D. Kote Taluk died last evening while it was being shifted to Mysuru Zoo for treatment.

The two-and-a-half-year-old feline was in a weak condition and it had sustained serious injuries as it was caught in a wire snare placed to trap wild boars. The injured animal had entered Kyathanahalli village yesterday morning and had bitten one person and injured another villager.

It had entered the house of a villager and the Department sharp-shooter had tranquillised it in a four-hour operation. Soon after the animal was trapped and shifted to a cage, Department veterinarian Dr. D.N. Nagaraj began treating it but the feline died after sometime.

The leopard was suffering from severe infection in the neck as it was caught in the snare. The animal was very weak due to starvation. The snare was removed and the leopardess was being shifted to Mysuru Zoo. However, it succumbed to the injuries on the way.

The feline had injuries and there was pus formation and had maggots on the neck and the left hind limb that was bleeding probably after trying to free itself from the wire snare. The post-mortem indicated that the leopardess had not consumed food for nearly three weeks and it might have entered the village looking for an easy prey as it was not in a position to hunt.

“We were not aware of the injuries and we had made an elaborate plan to capture the animal by placing nets around the house so that it could not sneak out. Finally it was captured after the tranquilliser dart was fired after opening the tiles of the house. We were shocked to see the plight of the animal. It was in a desperate situation and it gave up its fight for survival,” said Dr. Nagaraj.

Department officials said that a two-and-a-half-year-old leopardess typically weighs 60 to 65 kgs but this feline just weighed 18 kgs indicating that it was starving and weak. Seeing the injured leopardess after it was caught, villagers expressed sympathy over the feline as it was starving.