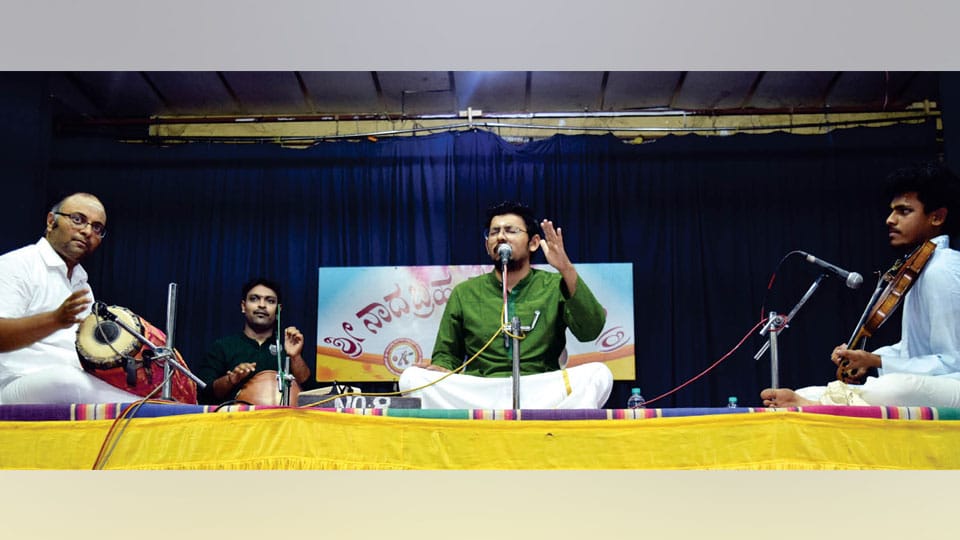 Vocalist Kartik Nara-yanan from Chennai gave a vocal recital at Sri Nadabrahma Sangeetha Sabha on Apr.27. He was accompanied on violin by Mysore Sumanth, mridanga by Sai Shiv Lakshmi Keshav and ghata by Vikram Bharadwaj.

Kartik is a disciple of well-known musician Rajakumar Bharati. While he has adapted the style from his Guru, his hard work shows in his rendition. He has earned the title ‘Nadakishora’ in the ‘Nadakishorotsava’ held by Sri Nadabrahma Sangeetha Sabha, Mysuru, seven years ago.

Kartik could connect with the listeners right from the opening varna ‘Evvari bodhana’ in Abhogi. ‘Gajamukhana Archisi’ in Hamsadhwani was a good choice, which also brought crisp swaras. ‘Mamava Sada Janani’ by Swati Tirunal in Kanada and ‘Ra Ra Mainti’ in Asaveri by Tyagaraja is a composition which should be handled with delicacy, bringing out the raga bhava in the composition. Kartik did justice to the composition.

Bilahari was a lucid elaboration. The alapana and the kriti rendition stood out for classical purity. Choosing ‘Shree Chamundeshwari Palaya Maam’ by Mysore Vasudevacharya, Kartik gave full vent to his innate creativity in the neraval at “Raaka Nishachara Sannibha Vadane’ and innovative swaras.

Sumanth was good and faithfully followed the main artiste. Sai Shiv Lakshmi Keshav and Vikram reveled in their dexterous display.

Kartik ventured to sing a short pallavi in the post-tani part. It was ayati pallavi — the first going in the descending order and the latter half in the ascending order.

The lyrics were — ‘Chandra Shekhara Gunanidhe Shekhara Gunanidhe Saananda Sacchidaananda,’ set to four kales. After the elaboration which included the neraval, swaras and the anuloma-viloma in three speeds, Kartik created swaras in ragamalika in Suruti, Chandrajyoti and Kannada. The concert concluded with T.V. Gopala Krishnan’s tillana in Kadanakutoohala, which was delightful.