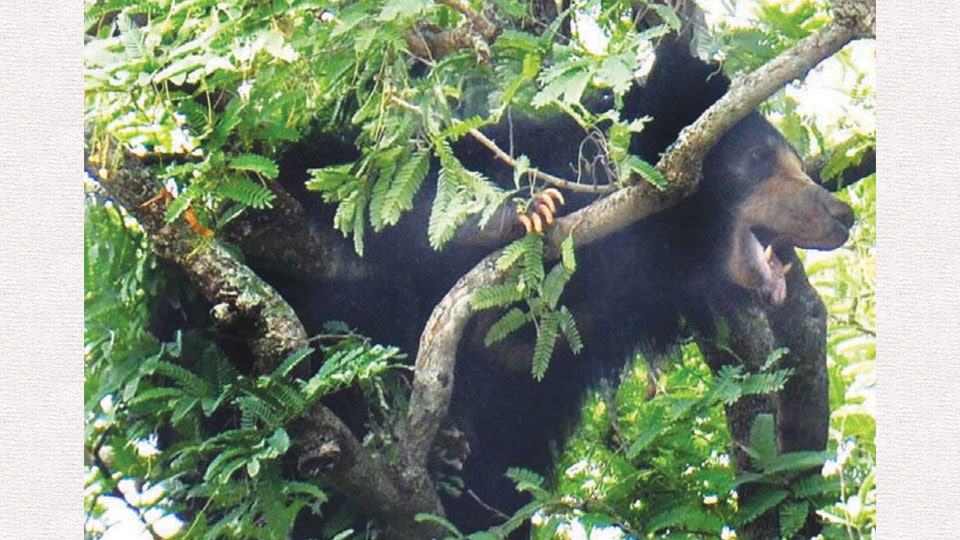 Mysore/Mysuru: An adult sloth bear strayed into human habitat near Begur on the fringes of Bandipur National Park creating a mild commotion and fear. Though it took hours for the Forest Department officials in their efforts to chase the bear back to the forests, they were unsuccessful. In the end, they told villagers that the bear would descend the tree on its own at night.

The incident occurred yesterday at Kortagere village and the farmers, who had come to their fields, spotted two sloth bears. Seeing the men, one of the bears ran back into the woods while the other climbed a huge 60-ft tamarind tree and took refuge there.

The bears had come in search of food from Omkar Range of Bandipur Tiger Reserve. The tree top bear had climbed the tree and had taken shelter amidst thick branches. Seeing the bear, many villagers gathered and the Department staff was alerted.

The officials along with field personnel attempted to scare the bear by bursting crackers at the tree base. The bear, however, did not budge.

As the villagers insisted that the bear had to be driven back into the forest, the officials stayed put till the dark to chase the animal. Due to the commotion and the crowd, a portion of chilli and turmeric fields under the tamarind tree was destroyed.