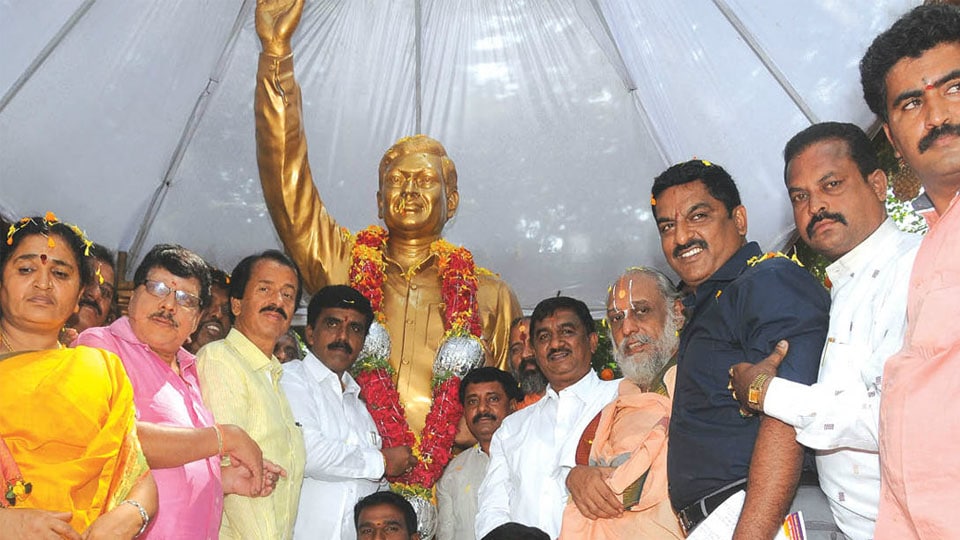 Tributes offered to Dr. Rajkumar on his birth anniversary

Mayor M.J. Ravikumar, MLA Vasu and a host of others garlanded the statue of Dr. Rajkumar at Dr. Rajkumar Park located close to the City Palace.

Speaking on the occasion, MLA Vasu, said that Dr. Rajkumar was ‘Bangarada Manushya’ in the real sense.

Pointing out that each of Dr. Rajkumar’s films had a different social message, the MLA said that the actor gave life to every role he played in films.

Crediting Dr. Rajkumar for many a Kannada Movement, Vasu said that the Thespian was a role model to everyone.

Ravikumar and Vasu cut a huge cake marking the celebration. Crackers were burst and sweets were distributed among the gathering.

A portrait of Dr. Rajkumar was taken in a procession on a colourfully decorated vehicle from the park to K.R. Circle and Back.

A host of folk troupes accompanied the procession.

Sweets were distributed to members of the public. Association President C. Narayanagowda and others were present.

There were celebrations else where in the city, with Simhada Mari Shivaraj Kumar and Appu Abhimanigala Sangha organising a blood donation camp at Vasavi Mahal in Shivarampet.

Sweets were distributed among members of the public.

Sangha President Srinath Babu and others were present.

Floral tributes were offered to the portrait of Dr. Rajkumar at K.R. Circle at a programme organised by Mysuru Zilla Dr. Rajkumar Kannada Sene.

Leaders H.V. Rajeev, K. Raghuram, Sene President P. Mahadevaswamy, office-bearer Balakrishna and others were present. There were celebrations at almost all auto stands across the city. Some organisations had organised mass-feeding to mark the celebrations.