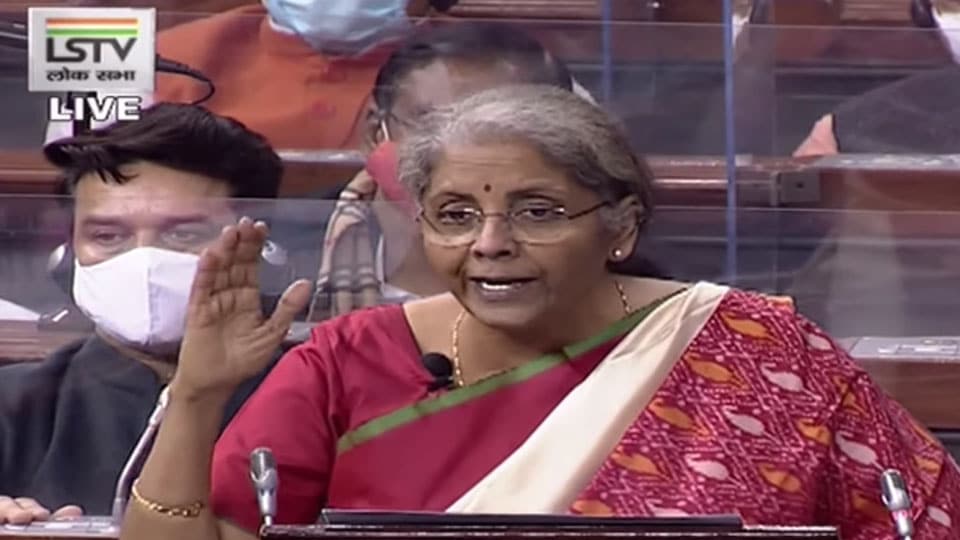 New Delhi: Finance Minister Nirmala Sitharaman presented the Union Budget 2021-22 in the Parliament this morning. In significant changes to taxation process, she announced scrapping of Income Tax for senior citizens under certain conditions.

Salaried people hoping for relaxations in direct taxation may have been disappointed as Government kept the slabs and rates unchanged. The Government has introduced Agriculture Infra Cess of Rs. 2.5 per litre on petrol and Rs. 4 per litre on diesel.

Start-ups will get an extension in their tax holiday for an additional year. Sitharaman also announced a major relief for States and said that the Government

has accepted the recommendation of the 15th Finance Commission to give 41 percent of the share of taxes to States.

Union Budget 2021-22 is based on six pillars from health to governance, she told the Lok Sabha. This is the first Budget to be presented in the on-going pandemic which has created havoc both on health and wealth. All sectors of the economy have been severely affected by the pandemic and looking for relief.

The main pillars the Finance Minister listed were health and well-being, physical, financial capital and infrastructure,

Sitharaman announced a total spend of around Rs. 2 lakh crore on healthcare with Rs. 35,000 crore on COVID-19 vaccine development and inoculation.

READ ALSO  When 'Mother of Trees' blessed the President

Nirmala Sitharaman also announced that the advance tax liability on dividend income shall arise after declaration of payment of dividend. At the conclusion of her speech, Sensex rose 1420.03 points, and at 1 pm was at 47,705.80; Nifty up by 362.70 points, currently at 13,997.30.

Sitharaman, in her speech, announced a push to the textile industry, a hike in custom duty on cotton and raw silk, a new cess on agriculture development, a Central University in Leh, a focus on sea-weed farming with a new facility in Tamil Nadu and a new vehicle scrapping policy that aims to provide the auto sector a boost among other announcements.

Social security benefits will be extended to gig and platform workers. Minimum wages will apply to all categories of workers. Women will be allowed to work in all categories and also in night shifts with adequate protection. To further extend efforts towards unorganised labour force, I propose to launch a portal to collect relevant information on gig workers, building/construction workers among others. It’ll help formulate health, housing, skill, and insurance credit and food schemes for migrant workers,” the FM said.

Sitharaman said over Rs. 2.33 lakh crore will be outlaid for the health sector and Rs. 35,000 crore will be spent on COVID vaccines. India has two COVID-19 vaccines and two more will be soon launched. She said that a new Centrally-sponsored scheme PM Aatmanirbhar Swasth Bharat Yojana will be launched with an outlay of Rs. 64,180 crore over six years to develop capacities of healthcare systems, develop institutions for detection and cure of new and emerging disease.

The Lok Sabha passed the Union Budget 2021-22 with a voice vote. The House has been adjourned till 10 am tomorrow.