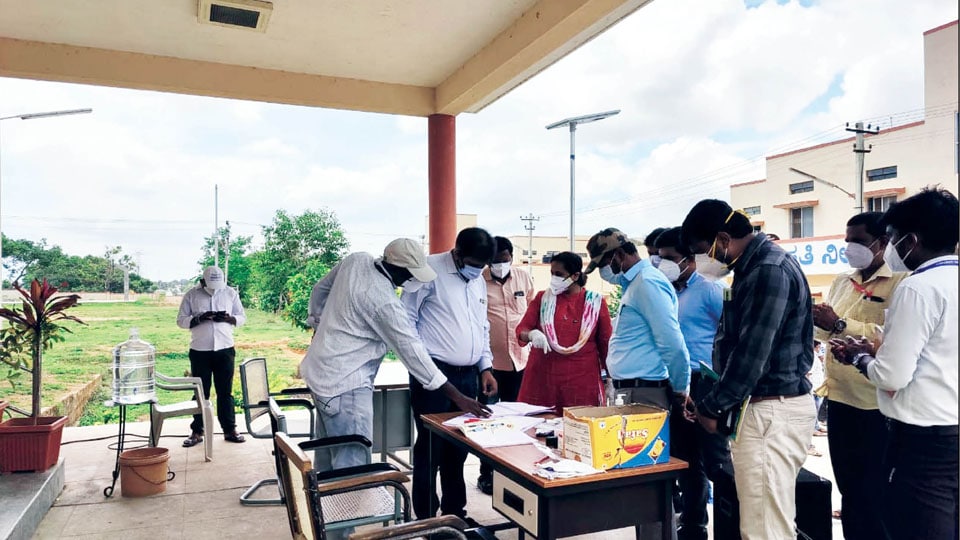 Mysore/Mysuru: Over 5,000 villagers have undergone Rapid Antigen Testing (RAT) within two days under Vaidyara Nade-Halliya Kade (Doctors’ march towards villages), a programme launched by the State Government to weed out Corona pandemic from rural areas.

District in-Charge Minister S.T. Somashekar had flagged off this ambitious programme on Friday. The District Administration, as part of this programme, is aiming to hold a mammoth Rapid Antigen Test (RAT) campaign in rural areas following spike in Corona positive cases.

Vehicles carrying the team of doctors, data entry operators, lab technicians, ASHA workers and Police are visiting villages in all taluks of the district that are having more number of infected persons and are conducting RAT at Government School premises of the villages.

On the first day, 1,700 persons have undergone RAT, while 3,000 persons were tested yesterday. According to Health and Family Welfare Department officials, this unique campaign aims to conduct RAT for all symptomatic patients in rural areas.

“We are aiming to conduct on an average 3,000 tests every day. Earlier, ASHA and Anganawadi workers used to visit each house in rural areas to conduct survey and shortlist the number of infected patients. I would request the public to co-operate with us and undergo testing in case they have any symptoms so as to prevent further spread of infection,” said District Zilla Panchayat (ZP) Chief Executive Officer (CEO) A.M. Yogesh.