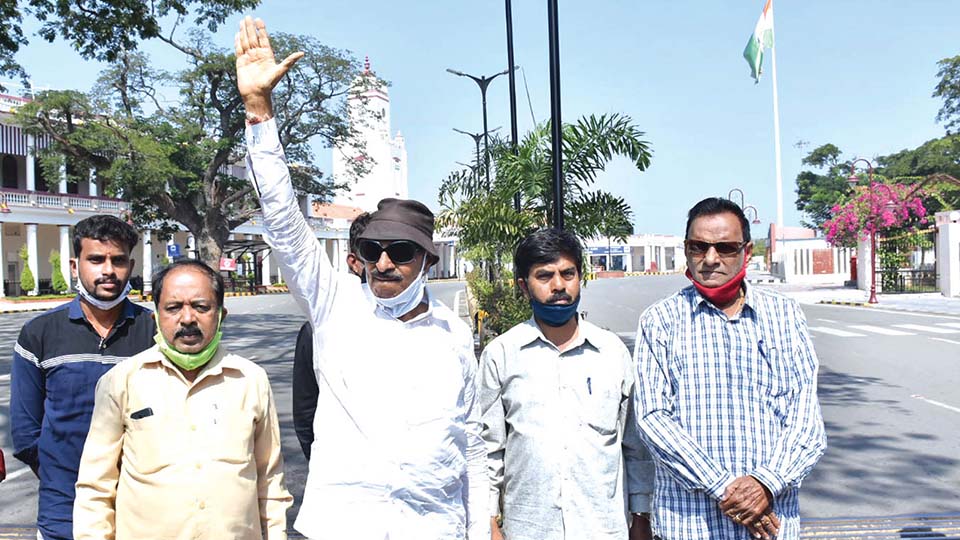 Vatal calls for ‘Rail Roko’ and ‘Jail Bharo’ on Jan. 9

Mysuru: Kannada Chaluvali Vatal Paksha President Vatal Nagaraj has called for a ‘Rail Roko’ and ‘Jail Bharo’ agitation on Jan.9, 2021, urging the State Government to withdraw its order on the formation of Maratha Development Corporation in the State.

Speaking to media persons on Tuesday after staging a protest in front of City Railway Station, Vatal demanded conferring the highest civilian award ‘Bharat Ratna’ on late seer Sri Shivakumara Swamiji of Tumakuru Siddaganga Mutt and withdrawal of order for the formation of Maratha Development Corporation.

Vatal said holding of ‘Rail Roko’ and ‘Jail Bharo’ was as part of second stage of agitation against the Government on the Maratha Development Corporation issue. On that day, strike would be held at over 1,000 places and the activists would sit on tracks everywhere. They would not allow the movement of trains,  he claimed.

On Jan. 9, he said, thousands of activists would take part in ‘Jail Bharo’ in all district headquarters. On behalf of the State of Maharashtra, Shiv Sena has filed a petition in Supreme Court demanding inclusion of some places in Belagavi district like Nippani into their State. Under this circumstance, the Karnataka Government must not constitute Maratha Development Corporation as it would remain as a biggest blot in history, he added.

On Recognised Unaided Private Schools Association’s (RUPSA) threatening to stop online coaching from next month if its demands were not met by the State Government, the Kannada activist slammed the Association for behaving like a chieftain. Unfortunately, Chief Minister B.S. Yediyurappa and Primary and Secondary Education Minister S. Suresh Kumar have lacked clarity on this issued. The panacea for this was nationalization of private educational institutions, Vatal noted.

The Government of India must confer Bharat Ratna on late on late seer Sri Shivakumara Swamiji of Tumakuru Siddaganga Mutt before Republic Day celebrations. Chief Minister B.S. Yediyurappa and the BJP MPs’ from Karnataka must put pressure on Prime Minister Narendra Modi in this connection. The CM must resign if he cannot do it. An agitation will be launched by involving all pontiffs.