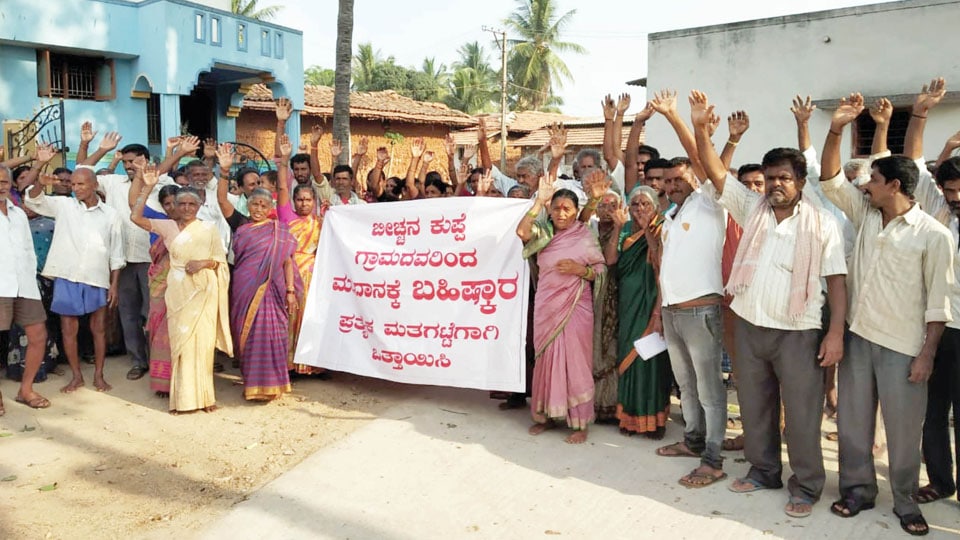 Srirangapatna: Villagers of Beechanakuppe in Srirangapatna Assembly constituency are demanding a new polling booth. This is a long-pending demand and if it is not fulfilled, the villagers have decided to boycott the forthcoming Gram Panchayat (GP) elections.

Learning about the boycott plan, a team led by Tahsildar M.V. Roopa, Taluk Executive Officer Bhyrappa, Sub-Inspector of KRS Police Station Naveen Gowda and Revenue Inspector Umesh rushed to the village yesterday and urged the villagers not to boycott elections.

Beechanakuppe comes under Hulikere Gram Panchayat limits and the villagers had boycotted the last Lok Sabha elections demanding a new polling booth. Later the villagers were convinced to vote by officers and Election Commission representatives.

It is a revenue village and there is no polling booth. But the officers have granted a polling booth to the neighbouring Mulugade village, Hosahundawadi. Beechanakuppe village has not seen an iota of development since the last 35 years and the roads are not asphalted. There is no drainage system and the village is constantly plagued by communicable diseases.

However, the official team that visited the village categorically told the villagers that a poll booth cannot be set up urgently. Rather they would inform the higher officers about the demand.

Regarding development of the village, the officials assured them that soon after the Panchayat election, an action plan would be prepared for road, drainage and street-lighting facilities.