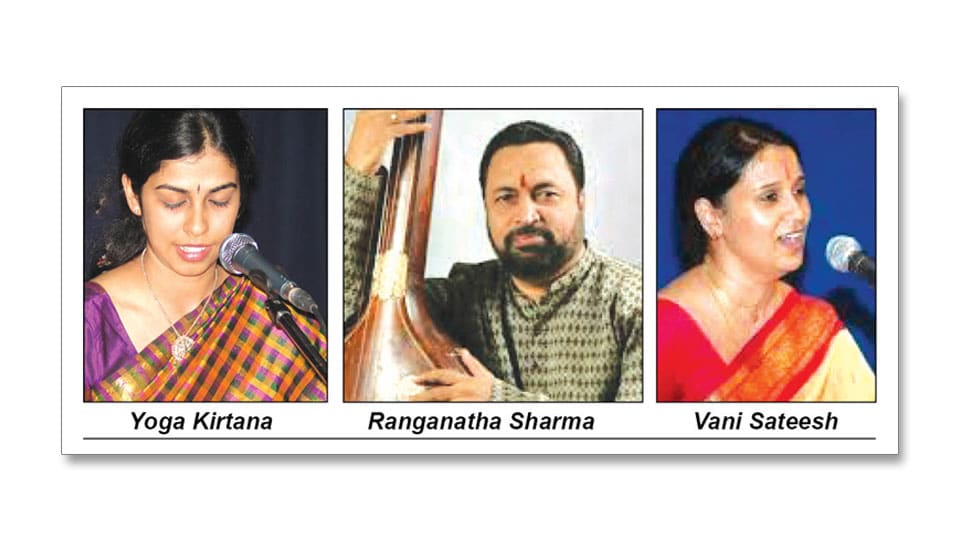 Mysuru:  Following music concerts have been organised at Sri Nadabrahma Sangeetha Sabha on JLB Road in city during this weekend:

Mar.8 (6 pm): Young talent from Bengaluru, J.K. Yoga Kirtana will give a vocal concert for Smt. Gunamba Nanjaraje Urs Endowment programme sponsored by Harin Nanjaraje Urs. She will be accompanied by Vaibhav Ramani on violin, Nikshit Puttur on mridanga and Vikram Bharadwaj on ghata.

Yoga Kirtana, a ‘B-High’ graded artiste of All India Radio (AIR), Bengaluru, hails from a literary and musical family and is the granddaughter of Prof. Veturi Anandamurthy, an eminent Telugu scholar and researcher and the daughter of eminent Veena Vidushi Yoga Vandana.

Presently, she is under advanced training in Karnatak Classical vocal music under the noted senior musician, Sangeetha Kalacharya Vidu. Neela Ramagopal for the past 10 years. Previously, learnt from Vidu. P. Ramaa, an eminent vocalist from Karnataka.

Sharma hails from a family of musicians and born to Lakshmi Ammal and K. Narayana Iyer in 1966. Narayana Iyer had studied music at Sri Swathi Thirunal Music College, Thiruvananthapuram, under doyens like Semmangudi Srinivasa Iyer, C.S. Krishna Iyer, Kumaraswamy Iyer and so on. Sharma began learning from him at the age of five and this training continued for about 15 years. Entire family is wedded to music.

Blessed with a sonorous voice, Sharma has performed extensively in India and abroad and is an ‘A Top’ artiste of AIR. Sharma is working as Associate Professor and research guide in music at Sri Sadguru Sangeetha Vidyalayam, Madurai.

Mar.10 (6 pm): Vocal concert by Vani Sateesh, accompanied by Anirudh Bharadwaj on violin, Tumkur B. Ravishnankar on mridanga and Sharath Kaushik on ghata. The programme is sponsored by Praphullachandra in memory of his wife, Indira.

Vani hails from a family of musicians — her great grandfather belonged to Bhagavata Parampara of Vijaya Dasaru, a prominent Haridasa; her grandfather, Bellary M. Raghavendrachar was a Professor of Music at Queen Mary’s College in Chennai. He has taught many musician including Jagadguru Sri Shivakumara Swamiji. Vani’s father, Vid. Bellary M. Venkateshachar and uncle Bellary M. Sheshagiri Achar (a great Vaggeyakara) were known as ‘Bellary Brothers.’

Vani’s first concert was at the age of 10. Vani moved to USA after her marriage and started performing outside India.

She is an ‘A’ grade artiste of AIR in Karnatak Classical Vocal, Devaranama & Sugama Sangeetha (Light Music) and ‘B High’ graded composer.

She is grooming more than 50 young musicians. She also promotes the cause of musician through the couple founded organisation ‘Vishesha.’