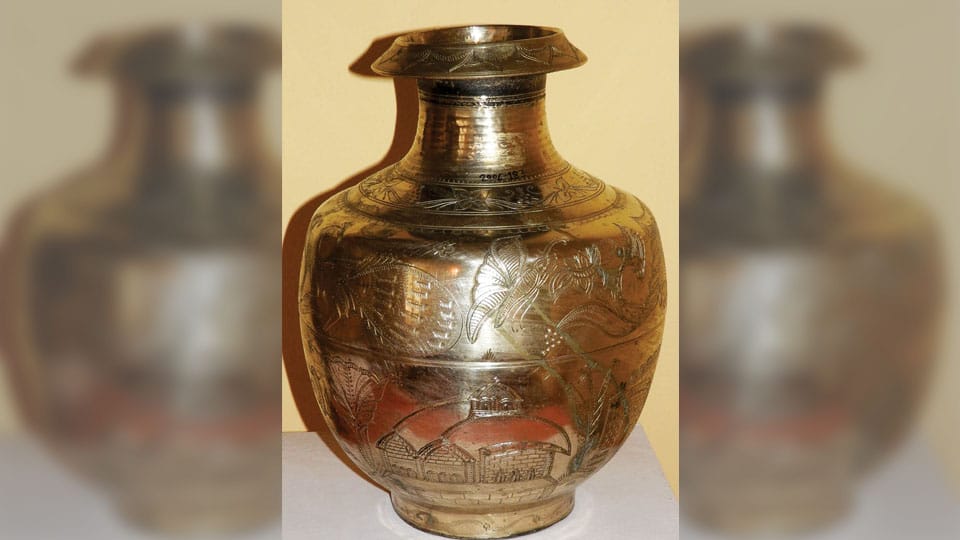 Mysuru: As part of its monthly exhibit, the Indira Gandhi Rashtriya Manav Sangrahalaya (IGRMS), Southern Regional Centre, Irwin Road, Mysuru, has displayed ‘Kolsi’, a decorative ritual object from West Bengal. The exhibit was inaugurated yesterday and this object is popular among the folk community in West Bengal.

Metal craft of West Bengal is well recognised for proficient creations from various metals like brass, copper, gold, silver and alloys. The design and ethnicity of metal crafts have maintained the tradition of ancient India with an amalgamation of modern trends.

Fourteen inches in height and with a circumference of 32 inches, Kolsi is a brass pitcher, locally known as Ghara. The object has been collected from Mutukganj village, Bankura District of West Bengal. The significance of the object is found in the ritual usage during marriage ceremonies.

The bride considers this object as very important at the beginning of her married life. The Kolsi (pitcher) is an essential object for the bride’s family to handover to the bridegroom’s family. During marriage, the Kolsi is filled with water for ritual purposes and the newly-wedded couple has to perform certain ceremonies and rituals.

After marriage the Kolsi will be used by the bride to fetch water for some time. The bridegroom’s family believes that if she (bride) can carry water without any difficulty, she can ably tackle tricky family situations.

The art of making metal craft in West Bengal has been handed down to the present generation of artisans from craftsmen who were adept at creating exclusive items since prehistoric ages. Artisans of Bankura, Bishnupur, Ghatal and Chandanpur in Midnapore engage themselves in engraving brass and bell metal work. In addition to this, one of the well-appraised forms of metal craft of West Bengal is Dhokra craft which is perhaps the only living tradition of metal image making in Eastern India.

The metal craft of West Bengal includes the superb creations of Dhokra craft that include ‘payeri’ or ‘mol’ (anklets), ‘hansuli’ (necklace), earrings and bangles. Besides these, some of the knick-knacks made by these artisans are the ‘Buli’ (piggybank), measuring bowls or ‘paikona’ of different sizes, ceremonial ‘potkalas’, which is mounted on a wooden pole for festivals.

In addition to these items, artisans create various kinds of ritualistic objects like Kolsi that have immense importance in Hindu religion. Images and figures of gods and goddesses, birds and animals, like Lakshmi, Lakshmi-Narayan, Pancha Pradeep, Siva-Parvathi flanked by Ganesh and Karthik, elephants, horses, owls, peacocks, etc.

The metal craft of West Bengal is highly acclaimed because of its rich cultural heritage that has given the craft a different dimension in the history of Indian metal craft. Though the ancient tradition has instances of heavy metal work, the contemporary trend has altered the style and with the fusion of tradition and style different pieces of art and jewellery are created.